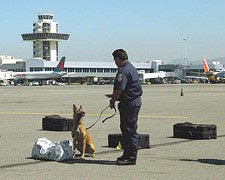 Finding hard statistics about government canine programs can be difficult. The Secret Service, for instance, considers the number of explosives detection canine teams it deploys to be sensitive information. Most government websites provide rather generic information with cute pictures of puppies that will be trained for various purposes, but say little about numbers and costs.

The Transportation Security Administration’s National Explosive Detection Canine Team Program (NEDCTP) assigns most teams to airports. In 2008, 370 teams were deployed at 69 airports, while 56 teams were deployed to 14 mass transit systems and railways. In 2009, there were 88 teams at 15 mass transit and rail systems. Assignments of teams are based in part on proximity of a rail system to critical infrastructure, so for Amtrak, for instance, the largest concentration of canine teams is along the Northeast Corridor. In addition to patrolling the facilities to which they are assigned, dogs also screen cargo and participate in joint missions, called Visible Intermodal Prevention and Response (VIPR) missions, which involve target deployments of participants from various agencies for specific objectives. Dogs are generally supposed to be visible at airports and rail stations on the theory that their presence may discourage terrorists and criminals. Cargo screening also includes patrolling facilities serving overseas military objectives.

Canine teams supplied by state and local law enforcement to airports and rail systems receive a TSA subsidy, capped at approximately $50,000 per year, but the state and local agencies must agree to devote 80% of the subsidized team’s time to the operational environment—i.e., to the airport or mass transit facility. About 500 state and local canine teams receive this support at present. The dogs one sees deployed at Penn Station in New York City may be wearing NYPD vests, but a significant part of the team’s expenses (including part of the officer’s salary) come from federal sources.

The GAO report describes the NEDCTP training as consisting of:

• Two months of learning to identify several explosive odors.
• A ten-week training course at Lackland where teams learn to detect explosive odors in environments such as aircraft and mass transit terminals, luggage, vehicles, cargo, and buildings.
• A two-month acclimation period.
• A 14-day “training mission” in an operational environment.

NEDCTP trains about 18 classes per year, each with 12 student teams, producing about 216 dogs annually. Dogs must be recertified annually. Some teams are taught to work “in maritime mode” for the U.S. Coast Guard.

The number of skilled canine teams is steadily increasing, and more will be certified through the end of 2010. To have an adequate number of dogs and personnel, the Department of Homeland Security cannot rely solely on dogs that it breeds at its Canine Breeding and Development Center, which began operations in 1999. Many dogs are acquired from the private sector or from nonprofit organizations. Although the number of dogs is increasing, only about six dogs at the average airport, and about six dogs per mass transit system, with most dogs working only one shift per day, means that the responsibilities of canine team are still spread quite thin.
Posted by John Ensminger at 6:25 AM