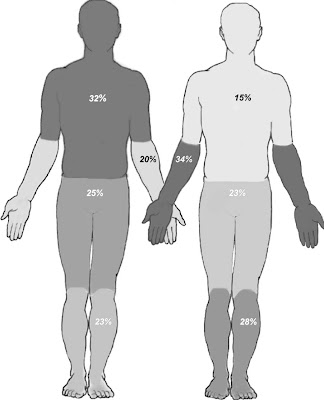 Do bites by police dogs differ from bites by pet dogs? Without having thought at all about it, I probably would have assumed that the difference would come from the fact a police dog is often trying to subdue someone who is running away, while a house pet might be inclined to bite someone playing too rough or too long, or doing something else the dog doesn’t like. There are other differences, according to a trauma physician who looked at records of bite victims of the Los Angeles Police Department K9 Unit form 1988 to 1990. Dr. Meade also looked at bite victims at the King-Drew Medical Center, an LA inner city public hospital.

Police dogs in the study were generally of larger breeds, such as Malinois and Dobermans, weighing from 70 pounds up. The dogs were taught to bite down hard, using their full mouths, including incisors in the front and molars at the back in order to strengthen their hold on a suspect. They were trained to “bite and hold,” i.e., not to let go until commanded to do so. Officers generally allowed dogs to continue to bite suspects as long as they struggled and fought to free themselves. This is called “bite until passive.” There were other differences. Police dogs bite the torso or limbs close to the torso, while domestic dogs more often catch a hand. The figure above shows the percentage of bites by body area, with police dog bites on the left and domestic dog bites on the right.

There were racial patterns. Caucasians made up 41% of LA County under the 1990 census but received only 7% of police dog bites. Hispanics made up 37% of the county population and were 32% of police dog bites. African-Americans made up 10% of the county population, yet were 60% of police dog bites. The article did not look at deployment patterns of police dogs and contained no discussion as to the disparity in the ethnicity of police dog bite victims. Judges have sometimes questioned whether racial factors might be present in the use of police dogs. See the dissent of Judge Logan of the Tenth Circuit in U.S. v. Moore, 22 F.3d 241 (10th Cir. 1994), questioning whether sniff searches at the Albuquerque train station might have indicated racial profiling. See also Chavez v. Illinois State Police, 27 F.Supp.2d 1053 (N.D. Ill. 1998), where the basis of a civil rights action concerned possible targeting of African-American and Hispanic motorists for drug sniffs.

Peter C. Meade, Police and Domestic Dog Bite Injuries: What Are the Differences? What Are the Implications about Police Dog Use? Injury Extra 37(11), 395-401 (2006). DNA testing has begun to be used to determine if a specific dog was involved in an attack. This could be useful in eliminating the need for rabies vaccinations in some cases. Brauner, P., Reshef, A., and Gorski, A., DNA Profiling of Trace Evidence--Mitigating Evidence in a Dog Biting Case. Journal of Forensic Sciences 46(5), 1232-1234 (2001). Matching a dog's mouth to bites is complicated as density of tissue and other factors can affect the bite pattern. See Bush, M.A., Thorsrud, K., Miller, R.G., Dorion, R.B.J., and Bush, P.J. (2010). The Response of Skin to Applied Stress: Investigation of Bitemark Distortion in a Cadaver Model. Journal of Forensic Sciences, 55(1), 71-76.
Posted by John Ensminger at 11:12 AM