The Good Life of the Medieval Hunting Dog 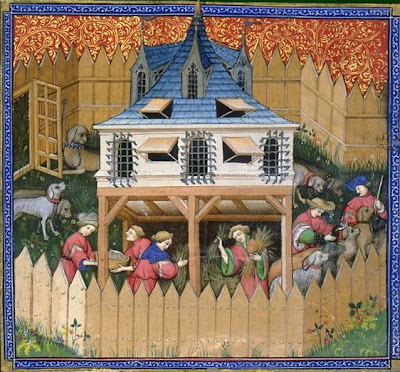 Dogs of the nobles fond of hunting in the late Middle Ages and early Renaissance had a fairly comfortable life.

The Oxford English Dictionary derives "kennel" first from the Old North French, kenil, becoming French, chenil, perhaps from a combination of the Latin for dog, canis, and a suffix meaning a fold, a place of keeping. The earliest usage identified by the OED is from a lexicon written about 1440 (Promptorium parvulorum sive clericorum). The lexicon gives canicularium as a Latin equivalent, a word that did not make Lewis & Short's Latin Dictionary, unless as a genitive plural of canicularis (of or pertaining to the Dog Star). Perhaps the term was only a theoretical construct of the lexicon. D.B. Hull concludes that there were kennels at least by Byzantine times, citing a passage in the Geoponica compiled in 10th century AD Constantinople. This work does not give a word for the house of the dogs, but refers to puppies scratching at their doors, presumably the doors of kennels.

By late medieval times, the kennel could be rather ornate. The miniature above is from Livre de Chasse, by Gaston Phoebus. John Cummins, in his wonderful work on medieval hunting, says that the kennel was about 60 by 30 feet, with the hounds living on the ground floor on beds of oak. The miniature shows the ground floor open all around, but Cummins suspects that this is artistic license so that we can see the pages scattering the straw bedding.

Edward, Second Duke of York, who died at Agincourt on October 25, 1415, translated, with considerable freedom, Phoebus into English as The Master of the Game, saying the kennel is to be cleaned every morning, fresh water put before the hounds twice a day. Fresh straw should be put down each day, a thick layer of it. The straw should be on boards a foot above the ground, as lying on the ground might make the dogs sick. A translation into modern English from 1909 renders York's description of the kennel as follows: 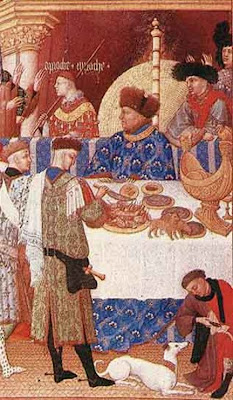 Cummins writes that "pages had to spend their days and nights with the hounds, partly to keep them from fighting." Sometimes poor people were allowed to sleep with the hounds as a kind of charity. It would have kept them warm but they might have had to put up with more than a few fleas. He refers to the straw being changed completely once every three days. 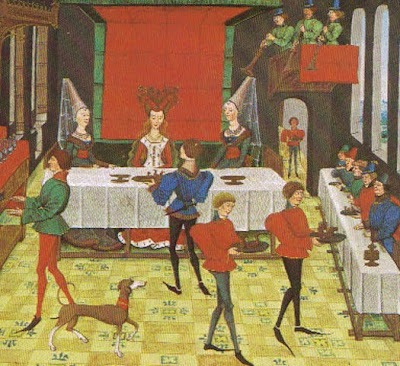 Note that there are no greyhounds in the kennel. Greyhounds were favored above all other breeds and had the run of the castles. This may also explain how the lines of greyhounds were kept pure by the nobility. The second plate is from Tres Riches Heures of Jean, Duke of Berry (1340-1416), now in the Musee Conde. The Duke is the man in blue with the brown hat. The wedding scene in the third plate,from the Histoire de Renaud de Montauban, dates from about 1470 and shows a greyhound, or conceivably a Saluki, since part of the Renaud romance involves a crusade. Other dogs might be kept by hunting staff in their quarters in the castle, but would probably not have had the same freedom as greyhounds. For pictures of collars worn by greyhounds from late medieval times onward, see the website of the Leeds Castle Dog Collar Museum.

Greyhounds may have been separated from other dogs not just for their comfort but to keep the lines pure. Phoebus gives a recipe for aborting an unwanted litter. A sort of canine chastity belt was known even in the ancient world (Anderson, p. 46).

A decoration in the margin of a medieval manuscript (Bodleian 264, dated 1338-1344) shows dogs being fed from baskets. Since bread crumbs and grains were standard in canine diets then (as now), this would be an appropriate vessel. (Double click on image to enlarge.)

Sources: W.A. and F. Baillie-Grohman (eds.) Edward, Second Duke of York, The Master of the Game (Chatto & Windus, London 1909); J. Cummins, The Art of Medieval Hunting: The Hound and the Hawk (Weidenfeld & Nicolson, 1988); J.K. Anderson, Hunting in the Ancient World (University of California Press 1984); D.B. Hull, Hounds and Hunting in Ancient Greece (University of Chicago Press 1964). James McNelis, a professor of English at Wilmington College, is preparing a critical edition of The Master of the Game, which will be very welcome.

Thanks to Brian Duggan and Richard Hawkins for keeping me focused on the unique status of sighthounds through much of history.
Posted by John Ensminger at 7:13 AM