Last month Fran Breitkopf and I posted a blog, Dog Park Law 101, in which we discussed statutes and cases that concern dog parks ("dog runs" in some older laws). We noticed how uncommon the phrase is in both contexts.

We contacted Professor David Favre of the Michigan State University College of Law on the issue. He suggested we consider drafting a model law concerning dog parks and we began a systematic review of relevant codes. Our analysis, which has culminated in model-law language, appears on the Animal Legal and Historical Center of the law school.

Anyone who has drafted or studied model laws generally attempts to provide a single statutory system, that is, to produce a single Act. Some cross-reference clean-up may be necessary so that the proposed legislation can fit within the general statutory system, but that should be kept to what is essential for this purpose. In drafting a model dog park law, Fran and I found that we could not easily restrict ourselves in this way. Many states have different laws that might have to be modified to allow for the possibility of dog parks. These include leash laws, dogs-running-at-large statutes, dangerous and vicious dog statutes, dog bite statutes, and abandonment laws. Depending on the state’s statutory system, it may also be advisable to revise general recreation and park laws, animal control authority provisions, dog pound provisions, on and on. We could find no one-size-fits-all solution for how a state should alter its statutory structure to allow for dog parks. 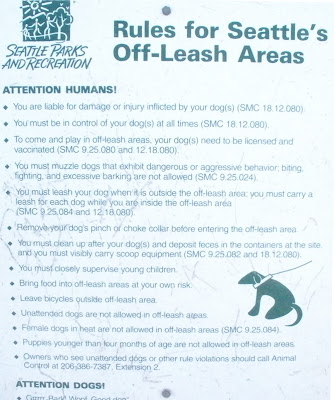 It gets more complicated. Many states delegate dog regulation to county and municipal legislators, and what may have to be altered at the state level in one state may require the attention of another set of legislative bodies in another state. Hopefully we have not made the problem insurmountable for those legislators, of whatever level, who wish to address this issue.

Of course, we have also included suggested rules for dog parks, but that was the easy part. There is substantial uniformity on those rules around the country, though factors such as shade, streams, nearby beaches or wells, proximity to schools, and other matters make for variation from place to place, so even here a one-size-fits-all approach was not completely possible. The picture, taken by Kingsbury Parker, shows Seattle's dog park rules. (Double click on the image for a larger display.)

The fact that in many states dog parks are not considered in general dog-related laws leaves these areas in something of a legal no-man's land. Police and animal control authorities may not want to try to enforce certain laws, such as dangerous dog laws, in a confined space where dogs are essentially violating leash laws and other laws to begin with, and where the authorities may correctly feel that they are being summoned to resolve disputes between pet owners who have different philosophies about what level of aggression should be permissible in such a space. Adopting laws that put dog parks in a defined legal context will provide police and control authorities with some parameters as to how they may approach and resolve situations that arise in dog parks.

We’re going to continue to follow this issue, so we ask dog park users to please give us your thoughts, as many already have. Fran can be reached at brightrose22@yahoo.com, and I can be reached at jensminger@msn.com.
Posted by John Ensminger at 6:20 PM