Additional Note: The Monday, August 17, 2015, edition of the Federal Register contains the VA's final rules regarding animals on VA property. 80 Fed. Reg. 49157.  Those rules will be the subject of further analysis in this blog.  Also, see the summary of the final rules provided by Psychiatric Service Dog Partners.

Slides presented at the May 19 meeting of the VA Advisory Committee on Prosthetics and Special-Disabilities Programs indicate that the proposed access regulations on service and therapy dogs, described here last November, have been given an expedited review status by Robert A. McDonald, Secretary of Veterans Affairs. 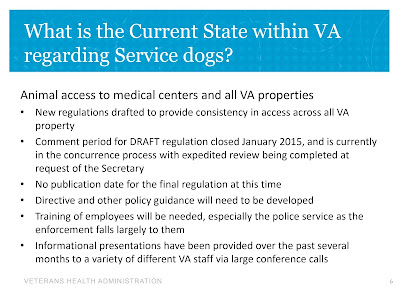 Although no date for issuance of the final rules has been announced, presumably the Secretary’s designation will mean that this should occur in the next few months.  One of the slides in the presentation, reproduced to the left, indicates there will be training programs for police service employees of the VA since, often working at the entrances to VA facilities, “enforcement falls largely to them.”  Other affected staff have already participated in conference calls regarding the proposed rules according the last bullet point in the slide.

Another slide from the May 19 presentation, reproduced below, makes the interesting observation that leased facilities used by the VA, which may include outpatient clinics and Vet Centers, "may be covered under the Americans with Disabilities Act for access depending on how lease agreement and what access law applies."  A note under the main bullet point adds: "Care should be taken when negotiating these agreements."  This suggests to me that there has been a problem somewhere, perhaps in a facility where the VA does not have absolute control over the space, but shares it with some other entity or service provider. 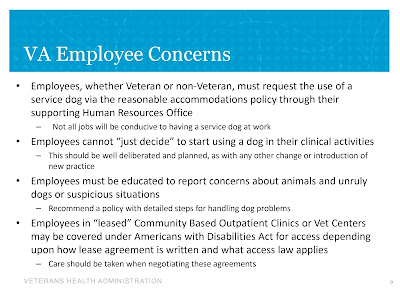 If the lease agreement did not provide that VA policy on service dogs should apply to the facility, it could mean that patients or employees with dogs defined as service dogs by the Department of Justice were bringing in psychiatric service dogs, so veterans began demanding the same privilege, or merely started bringing PTSD dogs with them to appointments or to work. (Many veterans are both VA employees and recipients of medical services at VA facilities.) Someone at the VA who had negotiated such a lease agreement is probably in hot water, though the flame should be lowered when the access rules are finalized.

Also, on May 27, the Department of Veterans Affairs issued proposed rules regarding transportation of eligible persons to or from a VA facility for examination, treatment  or care.  The proposal states that, for veterans enrolled in the VA’s health care system who need transportation, adjustments are to be made if the veteran requires transportation with a service dog (proposed 38 CFR 70.71(b)(2)).  In arranging transportation services, the veteran or other individual making the request on behalf of the veteran is to indicate “any special needs that must be accommodated to allow for transportation (e.g., wheelchair, oxygen tank, service or guide dog), and other relevant information.”  Proposed 38 CFR 70.73(a), 80 Fed. Reg. 30190, May 27, 2015.

A service dog, for the purpose of such an accommodation in transportation, is defined under the VA's service dog funding provision, 38 CFR 17.148, so will not include psychiatric service dogs used, for instance, by veterans with PTSD.  The cross reference for the definition of "service dog" should change to 38 CFR 1.218(a), the proposed access regulation, once that is made final. Otherwise, veterans with PTSD dogs, and other service dogs for which the VA does not provide funding, may be able to bring the dogs into a VA facility after the access rule is finalized, but will not be able to take the dogs with them onto VA transport vehicles in order to get to a facility. Ideally, of course, the definition of "service dog" in the funding rule should be changed as well. 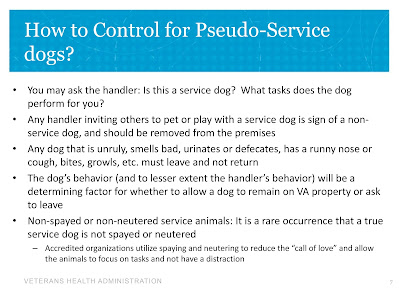 One of the slides used at the Advisory Committee meeting is about "pseudo-service dogs," and provides that employees can ask users if a dog is a service dog and what tasks the dog performs for the veteran.  It states that handlers who invite others to pet or play with their dogs probably do not have service dogs.  Also any unruly, unclean, un-house-broken, or generally misbehaving dog is deemed likely to be a pseudo-service dog. It can be expected that such generalizations will be part of the training that security officers and others will be receiving in the future.

The fact that the phrase "concurrence process" is used to describe the completion of the regulatory review (first slide above, second bullet point) may indicate that there have been disputes regarding the proposals within and between some sections of the VA, and that the individuals responsible for finalizing the rules are trying to get some level of cooperation across the agency. If nothing will be released until there is "concurrence," the optimism I expressed in the second paragraph above for a quick finalization may be misplaced. I hope I shall be proven wrong as to this speculation.

Thanks to Larry N. Long, who works with the Advisory Committee, for providing a copy of the slide presentation of Joyce Edmondson, VHA Animals in Health Care Committee Co-Chair.
Posted by John Ensminger at 4:51 AM