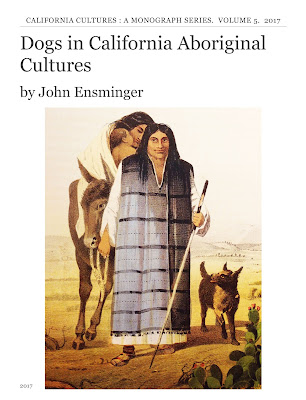 I have completed a monograph, published by the Land of Oaks Institute in the California Cultures Monograph Series (ISSN 2333-9667), which can be downloaded at no cost in iBook or pdf format. Go the the website for the Series and scroll down to the list of monographs. It is the most recent one posted. By drilling down, you will come to a page that offers the two download options.

What surprised me as I went through hundreds of ethnographic sources was that even by 1900, when Professor Alfred Kroeber began studying the tribes of California intensely, he and his colleagues and graduate students at Berkeley had to rely on historical sources and informant memories to describe what the dogs of the tribes used to look like. Their photographs of Native Americans, which often included dogs, almost invariably showed dogs of identifiable European breeds or mixed breeds, with very little indication of surviving aboriginal canine genetics. This is, of course, consistent with a growing body of genome research indicating limited survival of pre-European contact types of dogs in the Americas. The reasons for the largescale disappearance of most aboriginal canine types are very complex, even within the 83 California tribal groups studied by Kroeber and other ethnographers, including Spanish priests leaving out poison for dogs so that tribes would become more dependent on their missions and genocide of Native Americans and their dogs who were living too close to mining operations. Not all the blame for the disappearance of aboriginal dogs lies with conquistadors, missionaries, settlers, and miners, however, since some tribes began to prefer European dogs for hunting deer and elk, particularly in the northern and mountainous parts of the state.

This is a topic I will be pursuing on a broader scale for the Americas.

Posted by John Ensminger at 7:08 AM No comments: