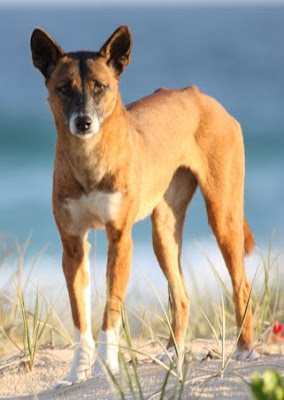 One way to look at dog behavior, and to consider the advantages they have provided to us as a result of domestication, is to compare dogs to wolves, their wild and not so distant ancestors (the separation occurring perhaps only 15,000 years ago). There are several lines to this research, establishing in general that dogs have adapted to us in many ways in the period of their domestication, ways that cannot be fully replicated even if wolf cubs are raised by humans in the same way as dog puppies. Then there are certain types of canids, such as dingoes, Canis dingo, which are thought to descend from animals that escaped from seafaring visitors to Australia between 3,500 and 5,000 years ago. How do they compare to domesticated dogs? A fascinating study of the relationship of dingoes to the indigenous people of Australia appears in the summer issue of Anthrozoos (Bradley P. Smith and Carla A. Litchfield, A Review of the Relationship between Indigenous Australians, Dingoes (Canis dingo) and Domestic Dogs (Canis familiaris), 22(2) Anthrozoos 111-128 (Summer 2009)). After arriving, the ancestors of dingoes rapidly spread across Australia and some nearby islands, soon forming ties with the human inhabitants. They lived near the camps of the indigenous peoples, perhaps because of the foraging value of being close to humans. Dingo pups began to live inside the camps, but they usually left before sexual maturity, at which point they returned to the wild, never to live with humans again. Evidence that they helped in hunting is disputed, but they did have their uses. Dingo pups, and domestic dogs after them, were found useful as bedwarmers. A “three dog night” is a cold night where you needed three dogs to keep you warm. Dingoes, like dogs, are given names and often treated as children by the indigenous Australians, and early explorers reported that barren women would nurse dingo pups. Dingoes and dogs were not usually eaten by indigenous peoples except in periods of starvation. One burial site included dogs, or perhaps dingoes, at the edge of the burial ground, seemingly protecting their masters in the spirit world just as dogs kept watch over the boundaries of the camp. Yet dingoes were rarely selectively bred, and modern dingoes probably have almost the same genetics as their ancestors of thousands of years ago. They were thus never fully domesticated, as dogs have been. Once European settlers brought domesticated dogs, these were generally preferred by indigenous Australians. While this blog will look at formal legal issues regarding dogs, I’d also like to discuss the anthropology and sociology of our relationship with dogs, which is ultimately necessary to understand the basis of the laws that define the boundaries of this relationship.

See also, Sophie Constable, Roselyn Dixon, and Robert Dixon (2010). For the Love of Dog: The Human-Dog Bond in Rural and Remote Australian Indigenous Communities. Anthrozoos, 23(4), 337-349.
Posted by John Ensminger at 10:03 AM