Mine Detection Dogs Can Work Remote 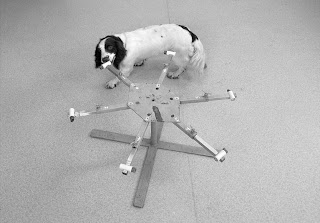 Mine detection dogs usually move across minefields, sniffing for TNT and other substances used in mines. This endangers both the dog and the handler, but a remote system, using air vacuumed from an area and passed through a filter, can be remarkably effective, even more effective than some machines that can search an area. A Norwegian scientist, Rune Fjellanger, has developed a system called Remote Explosives Scent Tracing (REST), in which dogs learn to recognized very small amounts of explosives captured in filters. In one circuit of a room, the dog can smell up to 12 filter caught air samples in boxes on a training apparatus consisting of a circular stand with stainless steel arms. A dog alerts to a filter by sitting or lying down. After four to five months of training, dogs can reach a 95% accuracy level or higher and errors can be reduced further by using several dogs on the same samples. If a dog alerts to a filter from a specific area, that area is designated as requiring clearance. Trainers use a reward-based "clicker training," but replace the clicker with a whistle. This system contains significant cost-benefit values over other approaches. A pilot study suggested that this approach be used in Bosnia. R. Fjellanger, E.K. Andersen, and Ian G. McLean, “A Training Program for Filter-Search Mine Detection Dogs,” 15 International Journal of Comparative Psychology 277-286 (2002).
Posted by John Ensminger at 1:24 AM