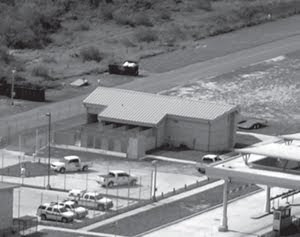 The Government Accountability Office, in a recent report looking at issues facing the Border Patrol, cited officials of the agency as saying that it does not have enough canine teams at borders, particularly in the southwest. Agency officials note that with the increasing sophistication of smugglers of drugs and illegal aliens, the dogs are necessary to detect the contents of concealed compartments. The Border Patrol expected to add 180 canine teams in 2009, and between 250 and 300 teams in 2010, but many of these teams will be replacing dogs that are retiring. By 2014, the Border Patrol expects to have 1,300 canine teams deployed at checkpoints and other assignments. The GAO report explains that there are basically two types of canine facilities at permanent checkpoints. The canine kennel building at the I-35 checkpoint near Laredo (shown here) is approximately 3,200 square feet and includes an office, storage room, bathing room for the dogs, bathroom, mechanical room, and a quarantine area. The planned kennel at the I-19 checkpoint, on the other hand, is only 290 square feet, apparently being almost exclusively used as a rest area for the dogs. GAO, Border Patrol: Checkpoints Contribute to Border Patrol’s Mission, but More Consistent Data Collection and Performance Measurement Could Improve Effectiveness, GAO-09-824 (August 2009).
Posted by John Ensminger at 9:45 AM