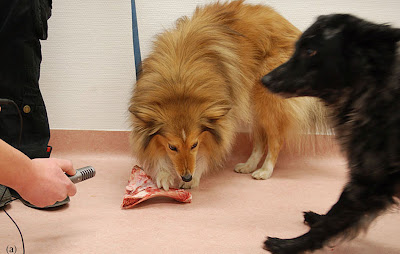 Animals have been shown to make sounds that are context specific, such as alerting other members of the group to a predator, even a specific type of predator. Dogs, like wolves, bark, but dogs bark more frequently and in more variable contexts than is the case with wolves. Both dogs and wolves growl in three situations that were studied in a recent paper: (1) offensive threatening in social conflict, (2) guarding food, and (3) during social play. Calls are described as functionally referential if three criteria are satisfied:

1. The signals displayed in different contexts have different acoustic structures.
2. Prerecorded signals evoke different behavioral responses in a playback experiment.
3. The manipulation of the referent alters the signal production.

A group of Hungarian and Austrian scientists recorded growls during three situations: (1) a dog guarding his food from a strange dog (a food-guarding growl, FG); (2) a strange human approaches a dog threateningly (threatening growl, TS); and (3) the dog plays tug-of-war with his owner (play growl, PL). The play growls were less than half as long as the two other types of growls. In a playback experiment, the researchers looked to see whether a food-guarding growl would cause another dog to retreat despite the physical absence of the dog making the sound. The threatening growl was also used in the same context to see if it would have an equally strong deterrent effect. The expressions of the dogs were different in the contexts of the growls. Thus, dogs growled at a threatening human with a closed mouth, but while defending food against another dog, they showed their teeth and pulled back their lips.

The results were dramatic. After hearing the growl for the first time, 11 of 12 dogs in the FG group withdrew from the bone within 15 seconds, whereas only 2 of 12 dogs in the TS group and 4 of 12 dogs in the PL group withdrew in that period. Seven dogs in the FG group did not approach the bone again within the next 90 seconds, while only one dog in the TS group and one in the PL group stayed away. It was clear that FG growls had a stronger deterrent effect than TS growls though both were in the “agonistic” category of sounds. The researchers also found that the growls of bigger dogs had no measurably greater deterrent effect than the growls made by small dogs, confirming at least in part the common belief that dogs don’t think much about size. Farago, T., Pongracz, P., Range, F., Viranyi, Z, and Miklosi, A., ‘The Bone is Mine’: Affective and Referential Aspects of Dog Growls, Animal Behaviour vol. 79, 917-925 (2010).
Posted by John Ensminger at 6:57 PM