Aerodynamics of the Wake of Walking Person 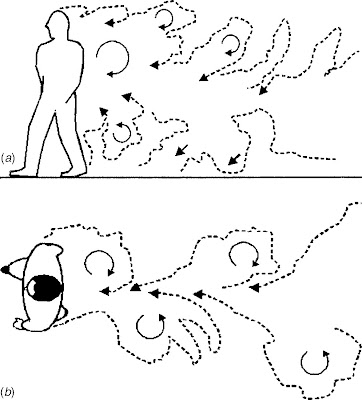 Trailing dogs are generally thought to follow a path based on their smell of proteins and/or bacteria in desiccated epithelial cells that flow off us at the rate of thousands per minute. This raises the question of how the air flow around a person affects the pattern by which these cells swirl and fall in our wake. Three engineering professors at Pennsylvania State University studied the aerodynamics of the human wake in an article published in the Journal of Fluids Engineering. The authors noted that prior studies of the aerodynamics of moving cylinders had not always taken into account the gap between the legs of a person. The authors state that “the leg separation has a significant effect on the structure of the wake for flows in the primary walking direction.” Swinging the arms, on the other hand, “has little significance in the formation of the wake.” The authors note that the results share many bulk flow structures with smoke visualization experiments. The figure shows the “significant physics” observed in flow visualization experiments. The results indicate two distinct wake regions behind a walking person, one behind the torso and one behind the legs. A significant downwash occurs behind the body which spreads the lower portions of the wake. Edge, B.A., Paterson, E.G., and Settles, G.S., Computational Study of the Wake and Contaminant Transport of a Walking Human, J. Fluids Engineering, 127, 967-977 (September 2005).
Posted by John Ensminger at 10:57 AM