If They Can't See Me, They Still Might Hear Me: Dogs Think About Sound When Stealing Treats (or Chasing Suspects?) 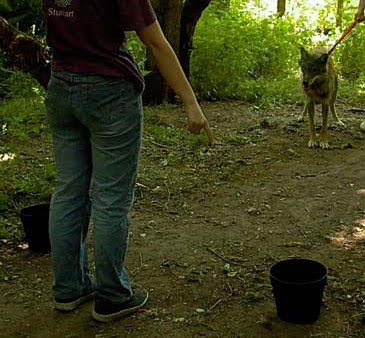 Canine sensitivity to human social and communicative cues has been the subject of significant research in a number of labs for several decades. Research has also looked at whether dogs are concerned with our attentional states, e.g., whether their behavior changes when we’re looking at them. If a dog is told not to eat a piece of food on the floor, the dog is more likely to obey if the human giving the command is watching the dog (and more likely to disobey if he is not watching). Even if the dog cannot resist the temptation to get to the food when the human is watching, it will do so in a more indirect manner, such as by trying to sneak up from the direction the human is not looking. I reviewed a number of studies to this effect in Service and Therapy Dogs in American Society (section on Eye Contact, beginning at page 22).

Recently, a research team designed an experiment to consider whether a dog’s behavior in taking a piece of forbidden food would differ when the dog could take the food silently from situations where taking the food would require making noise. They found, not surprisingly, that the dogs preferred to take the food in a way that didn’t make noise. The researchers tested dogs living in private homes as well as dogs from a shelter, the idea being to determine whether living with an individual or a family would affect a dog’s ability to use auditory information. There were 22 privately owned dogs used in the study, and 24 shelter dogs.

Food used for the study consisted of hot dog segments, bacon strips, and commercial dog treats. Food was placed in containers. All containers had brass bells hung across the opening, but for half the containers, the ringers had been removed. Owners of private dogs were asked what commands they would use to tell a dog to leave food alone. Dogs from shelters were told, “No.” Trials were videotaped. A dog was put about 1.5 meters from two containers, one of which was silent and one of which was noisy. The experimenter stood between the containers. The dog was held on a leash by someone else. After getting a dog’s attention, the experimenter put a treat inside each container. The experimenter demonstrated the auditory properties of the container by moving the string holding the bells five times. The noisy container rang during this manipulation, while the silent container did not. The dog was told “No,” or “Wait,” or another command designed to discourage it from going to the treat. The experimenter then adopted a Looking or Not Looking position. In the Looking position, she sat between the containers and looked straight ahead. In the Not Looking position, she put her head between her knees and faced the ground. The dog was then released from the leash. Everything was a double blind as possible.

The results indicated that dogs significantly preferred the silent container only in the Not Looking situation. When the experimenter was looking, there appeared no need for silence and they would almost as often approach either container. No significant difference was found between the privately owned dogs and the shelter dogs, so it does not appear that socialization in a family is essential to a dog’s capacity to consider the effect of sound. The authors note that these results could have significance in law enforcement and military contexts. Although they do not speculate further on this suggestion, it is possible to imagine that training a dog in suspect apprehension could be designed to take into account how a dog’s ability to surprise and subdue a suspect will be increased if the dog is sensitive to the suspect’s ability to hear its approach.

A question that might be worth investigating is whether different breeds show specific patterns to making sounds. A study by researchers in Hungary looked at reactions of dogs selected from three breed groups (Belgian shepherds (Tervuerens and Groenendaels), retrievers (golden and Labrador), and sled dogs (malamutes and huskies)). The sled dog group and the retrievers continued to show friendly, tolerant behavior even when a stranger approached in a threatening manner, but half the Belgian shepherds responded to threatening behavior with their own aggressive and threatening behavior. Even those shepherds that did not respond aggressively did not ignore the threatening behavior. Thus, a threatening suspect might elicit different levels of responses from different breeds of police dogs. Sound factors might be worth investigating in such contexts. Vas, J., Topal, J., Gacsi, M., Miklosi, A., and Csanyi, V. (2005). A Friend or an Enemy? Dogs' reaction to an Unfamiliar Person Showing Behavioural Cues of Threat and Friendliness at Different Times. Applied Animal Behaviour Science, 94, 99-115.

Dogs Misled by Strangers as Well as Owners in Food Choice Experiment. Another recent piece of research considered whether dogs, in a food choice experiment, were misled more easily by their owners than by unfamiliar but friendly humans. Thus, if dogs could choose between a slice of dry sausage and a (presumably) unappetizing pellet, would the pointing of the handler towards the pellet be more persuasive than the pointing of a stranger, despite the dog having seen where the tastier item was placed. The researchers found that dogs were misled almost as much by strangers as by their handlers. Marshall-Pescini, S., Prato-Previde, E., and Valsecchi, P. (2010) Are Dogs (Canis familiaris) Misled More by Their Owners than by Strangers in a Food Choice Task? Animal Cognition (not yet in print). As I’ve said before, they trust us too much.

Studies on Other Species. These types of two-choice tests have been done with other animals besides dogs, including chimpanzees and macaques. The picture shows a wolf in a two-choice test with a human pointing towards one of the choices. Here, researchers found that wolves could be trained to react to human pointing gestures, an ability that may have been significant during the process of domestication. Viranyi, Z, Gacsi, M,, Kubinyi, E., Topal, J., Belenyi, B., Ujfalussy, D., and Miklosi, A. (2008). Comprehension of Human Pointing Gestures in Young Human-Reared Wolves (Canis lupus) and Dogs (Canis familiaris). Animal Cognition, 11, 373-387.
Posted by John Ensminger at 6:41 AM