Life is a High School for Puppies Too 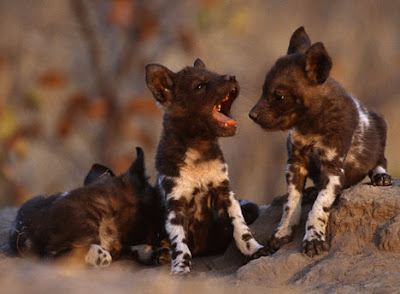 When two dogs are playing competitively and a third joins in, the new individual may attack or bite one or the other. How does it choose which one to support and which one to attack? Three theories have been advanced:

A human perspective might prefer the first or second approach be taken by our best friend, but one recent study at the University of Michigan concluded that the third theory fits the data best for puppies at play. Studies on interventions in competitive situations have largely focused on primates, though one study of wolves found that a subordinate male wolf successfully challenged his father because he received the assistance of two of his male siblings. (Jenks, S.M. (1988). Behavioral Regulation of Social Organization and Mating in a Captive Wolf Pack. Ph.D. thesis, University of Connecticut.)

The University of Michigan researchers noted that play fighting includes chasing, rough-and-tumble wrestling, genital sniffing, mounting (mimicking copulatory behavior), placing the chin over the other dog’s back, and inhibited biting. Aggressively standing over a submissive animal or side-to-side shaking of the head might also be involved, but the more serious actions will be intermixed with other cues that will help maintain the play atmosphere. (Bekoff, M. (1995). Play Signals as Punctuation: the Structure of Social Play in Canids. Behaviour, 132, 419-429.)

The researchers observed four litters, watching them extensively at the ages of 3 to 8 weeks, 10 to 11 weeks, and 27 to 40 weeks. Although the dogs may have gone to new homes, they were brought back to play with littermates for daytime sessions during the observation periods. Play was videotaped and the puppies had colored collars for easy identification. The researchers found that interveners targeted puppies in the losing role 69% of the time, but in 19.5% of the interventions the loser could not be identified. No support of preferred play partners was detected in the data, nor any tendency towards reciprocity. Interveners most commonly used biting in the first two periods, but preferred “jump ons” and mounting in the third period. Most of the dogs were neutered, but mounting occurs frequently in play. Both males and females used mounting.

The researchers suggest that puppies may target the loser when intervening in order to improve their own rank among littermates. In wolf packs, dogs losing at play may get less food, grow less, and be more likely to leave the pack. Competitive play may be part of the way dogs establish dominance hierarchies. It might also help dogs develop cooperative skills for group hunting and protecting lairs against intrusion by other packs.