The Dogs of the Night Watch 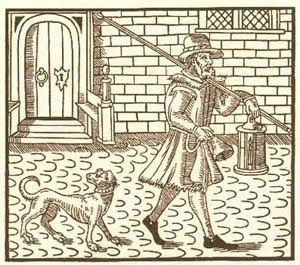 In the urban centers of northern Europe in the Renaissance, a lowly and lonely profession was that of the night watchman. Those wandering the dark streets at night could often be presumed to be up to no good and night watchmen were usually armed against the dangers. It is therefore not surprising that night watchmen would acquire dogs to add the animals' senses to their own, as well as to combine the jaws of dogs with the weapons of their arsenels.

The title page of a book by Thomas Dekker printed in 1608, reproduced here, shows a night watchman of London carrying a lantern and a pike and followed by a dog. The dog, more alert than the master, has turned backwards towards a sound or a threat, its face showing almost human suspicion if not anger. No leash is depicted but the dog's collar appears unnaturally lifted towards the front. Perhaps the leash was left out because the artist wanted the teamwork of the pair, rather than a leather strip between them, to intertwine their fates. Or perhaps there never was a leash and I'm getting overly creative in my interpretation.

A woodcut from not too much later shows a night watchman of Antwerp subduing a criminal using just such a pike and a dog. The dog is biting the criminal in the leg while the watchman prepares to stab the man in the buttocks. Schoon and Haak, in their book, K9 Scent Identification, reproduce the woodcut and a greeting card from the night watchmen of Leuven in 1786, showing five men following or being followed by their dogs. These authors suggest that the companions of the night watchmen may have been the first police dogs and I have found no evidence to disprove this idea.

The dogs in these seventeenth century depictions are all medium to large, unlike the dogs leading blind men that I have described in prior blogs (October 9, September 14, July 19). Although the relative size of the dogs may have been adjusted for the artists’ purposes, it does seem that guard dogs were generally large, while guide dogs were small because of the poverty of their masters and the difficulty they would have had in feeding and caring for the animals.

Some of the dogs of the night watchmen may have been trained to attack. Ulysses Aldrovandus, in his natural history, De Quadropedibus, printed in 1621, writes that war dogs were trained as follows:

"The [war] dog ought to be trained up to fight from his earliest years. Accordingly some man or other is fitted out with a coat of thick skin, which the dog will not be able to bite through, as a sort of dummy: the dog is then spurred on against this man, upon which the man in the skin runs away and then allows himself to be caught and, falling down on the ground in front of the dog, to be bitten. The day following he ought to be pitted against another man protected in the same manner, and at the finish he can be trained to follow any person upon whose tracks he has been placed.... Blondus is even of the opinion that from time to time it is a good thing to go for this dog with drawn swords."

Aldrovandus reports that war dogs were more common in Spain than elsewhere in his time, and there are records of their murderous use by conquistadors in the New World. Stephanitz cites the 1473 edition of Mynsinger as stating that dogs were taught to "stand up to a man, who was clothed in a stout coat of skins lest the dog should bite him during his education."

Rembrandt’s Night Watch, displayed in the Rijkmuseum in Amsterdam, contains the figure of a dog towards the lower right of the painting. The dog was pointed out to me more than a decade ago by Milton Bellis when we stood beside the painting the night of a reception at the museum for the International Swaps and Derivatives Association. Milton, once a UPI correspondent in post-WWII Europe, knew some of the scholarship on Rembrandt's painting. The painting, earlier known as The Company of Frans Banning Cocq and Willem van Ruytenburch, may have nothing to do with night watchmen. The dog, the only animal in a painting of 34 people, barks at a drummer. It has been suggested by the art historian Georges Boka that the dog in the painting is a symbol of death. At a time when one could not turn on a light bulb in the night perhaps it was easier to imagine a dog barking at a soul searching for the boatman to cross the final river.

The tradition of night watchmen using dogs may have continued until the beginning of formal canine units in police forces. Policemen who used dogs generally bought their own initially, something mentioned in a number of nineteenth century and early twentieth century U.S. legal cases. J.J. Sullivan, official historian of the New York City Retired Transit Police Officers' Association, has found a notation in the records of the NYC police for 1853 that may indicate the police had in that year purchased "1 dog." It is not clear what the police department, almost 50 years before the first police canine units on record, would have wanted with a dog. Dogs were known to be used to guard warehouses and armories in the nineteenth century, and it is possible that some such use was being made of the dog.

Thanks to The American Kennel Club Library for providing me with the translation of portions of Aldrovandus contained in an Appendix XIV of Edward Ash, Dogs: Their History and Development (London 1927).
Posted by John Ensminger at 9:26 PM