Wolves Likely to Become Fair Game in Most of Wyoming

The Department of the Interior’s Fish and Wildlife Service has determined that the “best scientific and commercial data available indicate that wolves in Wyoming are recovered and no longer meet the definition of endangered or threatened under the Endangered Species Act….” Proposed rule changes are suggested in accordance with this presumed development, though implementation would require, in addition to finalization of the rules, that the State of Wyoming make certain statutory and regulatory changes. The Service assumes, probably correctly, that there will be little or no resistance by Wyoming officials since the changes will mean that wolves will no longer be protected in most of the state. 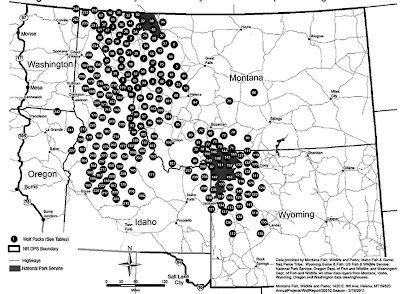 The plan to delist wolves in Wyoming is part of a trend on the part of the U.S. Fish and Wildlife Service to reduce protection of wolves throughout North America, as discussed here in May.

The Service seeks comment on a number of questions on its Wyoming proposal, some of which are troubling, given the conclusions the agency has already reached. The questions are:

The Service has scheduled a public hearing on the proposal to take place on November 15, 2011, at Central Wyoming College in Riverton, Wyoming. (More information available at 307-855-2000.) The Service is also required to subject its proposal to a peer review panel, which will post its assessment online at www.regulations.gov. As of this writing, the peer review assessment has not been posted.

The Service has in the past listed four subspecies of the gray wolf as endangered:

In 1978, the Service decided to stop worrying about subspecies and listed the entire species of the gray wolf as endangered in the 48 coterminous states and Mexico. Recovery plans were generated for the Great Lakes area (1978), the northern Rocky Mountains (1980), and the Southwest (1982). Gray wolves were reintroduced into central Idaho and Yellowstone National Park. The distribution of Northern Rocky Mountain gray wolves is shown in the first map, where each number represents a pack. (Double click to enlarge.)

Department of Interior’s Efforts to Delist

In 2000, gray wolves in the northern Rocky Mountains reached numerical and distributional recovery goals, and delistings began until the Service’s actions were contested by environmental groups and overturned in federal courts in Oregon, Vermont, and Montana, in decisions in 2005, 2008, and 2010. Despite its trend towards finding the wolves no longer in need of much protection, the Service fought Wyoming over a plan that the Service said would not ensure the state’s share of the “recovered” gray wolf population. Eventually, with Wyoming making some revisions to its laws and management plan, the Service pulled out of this battle. Again, an environmental group, the Defenders of Wildlife, took the Service to court and won. What happened next is described in the Service’s own words, which makes one wonder if the agency always knows what it’s doing:

“Following the July 18, 2008 court ruling, we reexamined [our findings] and Wyoming’s statutes, regulations, and management plan. This reevaluation considered several issues not considered in the previous evaluation. We determined that the best scientific and commercial data available demonstrated that: (1) The NRM DPS [Northern Rocky Mountain Distinct Population Segment] was not threatened or endangered throughout “all” of its range (i.e., not threatened or endangered throughout all of the DPS); and (2) the Wyoming portion of the range represented a significant portion of its range where the species remained in danger of extinction because of the inadequacy of existing regulatory mechanisms. Thus, on April 2, 2009, we published a final rule recognizing the NRM DPS and removing the DPS from the List of Endangered and Threatened Wildlife, except in Wyoming, where wolves continued to be regulated as a nonessential, experimental population ….” (emphasis added)

In other words, the Defenders of Wildlife and a federal district court were right and the Service was wrong by its own admission. The Defenders of Wildlife were not satisfied, however, and sued again, and won again. A federal district court in Montana said that the Service could not narrow its protection of the Northern Rocky Mountain gray wolf to Wyoming, because allowing protection of only a portion of a species’ range was inconsistent with the Act’s definition of “species.” 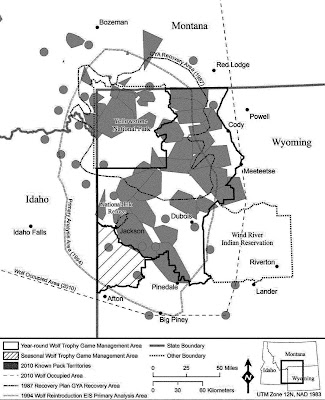 Congress got into the fray in 2011 with a provision in the Department of Defense and Full Year Continuing Appropriations Act of 2011, which, after it was signed by President Obama, required the Service to reissue its 2009 delisting rule. The federal law was again challenged, this time by the Alliance for the Wild Rockies, but the luck of the wolves ran out and the Alliance lost the case. The Service then began negotiating with Wyoming on exactly how wolves would be treated in the state, and an agreement was reached for protection, but primarily in the northwestern portion of the state. The second map shows those areas where wolves will receive some, at least seasonal, protection. Everywhere else in the state they are fair game and such of them as are unlucky enough to get to the white space in the map probably won’t last very long.

The Service has faith in Wyoming and says that the state “commits to an adaptive management approach that adjusts management if the … minimum level of gene flow is not documented, as well as to use human-assisted migration if necessary.” The Service refers to the intention of the Wyoming Game and Fish Department to reduce the number of wolves in state jurisdiction down to a minimum population level of ten breeding pairs and at least 100 wolves (most packs have only one breeding pair). One must question whether the wolves should put as much faith in Wyoming’s intentions as the Department of the Interior does. Wyoming’s policy was to allow only six breeding pairs of wolves outside of the National Parks, a number so low that it probably satisfied by some official signing a form to the effect that a rancher here or there failed to shoot the wolves on his ranch.

The Service concedes that its current optimism on the survival of the fledgling wolf populations may be temporary, that human predation and other factors may push the species back towards extinction soon enough. Nevertheless, the Service promises to continue to monitor the status of the gray wolf populations in the northwest. The Department of the Interior appears to remain a political football even in a Democratic administration and, unfortunately, President Obama seems no different from prior presidents in taking sides against the wolves.

The conservation movement began over a hundred years ago as a way of keeping a significant part of the United States pristine, in the state in which our ancestors found it. Unfortunately, the Department of the Interior, the modern guardian of the objectives of that movement, has whittled that purpose down to keeping minimal breeding populations of many species. The federal parks and forests are no longer our ancient and wild woodlands, but are rapidly becoming theme parks where ever increasing human alteration of the environment is both acceptable and easily justified. The wolves deserve better, but they have no vote. Even if they did, I'm fairly sure the 2012 election will offer them no real alternative.

Department of the Interior, Endangered and Threatened Wildlife and Plants: Removal of the Gray Wolf in Wyoming from the Federal List of Endangered and Threatened Wildlife and Removal of the Wyoming Wolf Population’s Status as an Experimental Population, Docket Nos. FWS-R6-ES-2011-0039; 92220-1113-0000-C6, 76 Fed. Reg. 61782 (October 5, 2011).
Posted by John Ensminger at 7:53 AM