What is a Therapy Dog? Listen to a Poem by Diana Edelman

In April 2010, Diana Edelman, a retired teacher and poet who lived in Woodstock, met Chloe and me at Benedictine Hospital in Kingston, New York.  She asked me how she could contact me, and the next day she sent an email with a poem attached.  I found it so moving that I asked her if I could find a publisher, to which she agreed.  I sent the poem to several dog magazines but none expressed interest.

Diana died on December 3, 2011.  She stopped taking infusions at Benedictine Hospital (in a room called 4SMC) and though I called her several times after that, and we talked about getting together, I did not make the effort that I should have made to bring Chloe to her house.  That was a failing on my part.  A serious one. 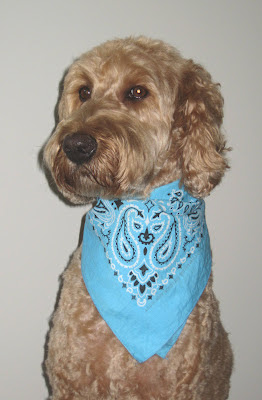 I continue to believe that Diana’s poem is the most precise statement I have ever read of what a therapy dog is and does.  To this day I cannot read it without tears.  The first picture is of Chloe wearing the bandana mentioned in the poem.  The second shows Diana with two of her grandchildren in Alaska in March 2011.  Her daughter, Susan Houlihan, tells me that even months before her death, Diana was able to hike up to eight miles.

You padded into the infusion room on 4SMC on four short feet.

Their anatomy was so concealed by your thick carpet of curls that they looked to be mere horizontal bends at the ends of your long legs like a minimalist stick figure.

Your curly coat, the color of brown sugar melting into oatmeal, covered every inch of you.

You stopped at my chair, my pole, my suspended plastic bags and tubing—my unit.

"Labradoodle," explained your human. "This is Chloe."

My fingers burrowed into your warm swirls.

There were enough of them to make a curly cap for every chemo skinhead who frequents 4SMC.

But you didn't appear to flaunt your profusion of furry adornment among us—the monastic order of bare naked skulls.

Instead—in a gesture of solidarity—you appeared in a turquoise bandana neckerchief, a Caribbean lagoon in your expanse of whirling sands.

As you know, Chloe, advanced cancer treatment is a harsh world, which compassionate, skillful humans struggle to soften, using blunt tools.
"Advanced" refers to the disease, not the treatments.
Most of these are the medical equivalent of aerial crop spraying.

Every gain extracts its price.
A patient counts her bonus days of life on one hand and her losses on the other.
The two, inseparable, are a package deal.
It's a tough contract to sign.

But when push comes to shove, the contractee makes her trades one by one.
How many days can she buy with her hair?
How many with the tender flesh of her mouth?
How many with the feeling in her hands and feet?
Her settled stomach?
Her functioning gut?
Her memory?
How many days does a white cell fetch, or a red?
Those tiny protectors and energizers that once rafted exuberantly in her river of life.
What is the barcode on 24 hours and 24 more and 24 more?

Well, in this particular 24, Chloe, I was in the right place at the right time.
Both my bands devouring your luscious curls, your solid form, I already felt a heave in my chest and water channeling toward my eyes. 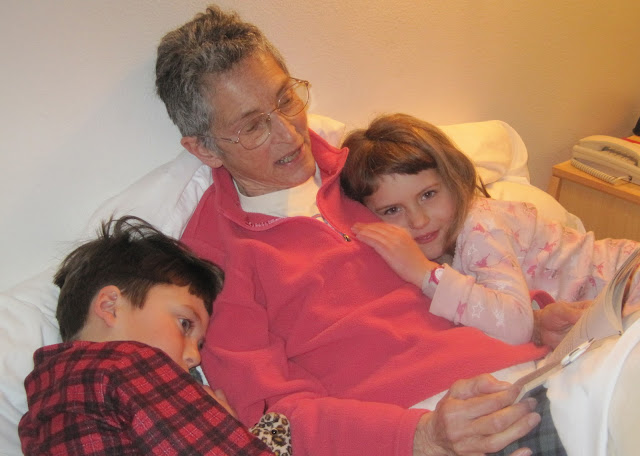 Then I glanced up from your flanks and noticed your labradoodle face close to mine.
Your eyes, the exact same color as your everywhere curls, were the softest, most inviting, pure and honest I'd ever seen.
They asked in the simplest, wordless way, "How are you today?"

It was out of the question to lie to such eyes—even a teeny, tiny bit.
I burst out crying.

Soft as they looked, Chloe, your eyes bored like diamond bits down through the endless strata of solid facts and hopeful strategies that I'd futilely attempted to assemble over the three years since diagnosis .... from mountains of information, misinformation, conflicting information, laughable confusion, the relentless pressure to be positive, and just plain pipe dreams.

You knew that deep below all those ever shifting mirage layers was a simple clear pond that was actually there.

When its waters surfaced I knew it was there, too.

After only a few minutes your human led you away to another lucky person at the end of a tube.

I was so sorry to see you go, Chloe.

You brought me more peace than I've known in a good while.

Now there's a photograph of your brown sugar and oatmeal labradoodle self in my brain.
I can look in your open vessel eyes whenever I want and dip into that clear, honest pool.
Revived for another 24.

And I had thought that brief encounters with total strangers where you gaze into each other's eyes and you are never the same again only happened in the movies.