Yelling at the Umpire: What the Unanimous Decision of the Supreme Court in Florida v. Harris Is Coming to Mean to Law Enforcement in the United States

Criticizing a 9-0 decision of the United States Supreme Court, one without even a concurrence, without the hint of disagreement along the bench, is a little like yelling at the umpire.  You know you’re not going to change the call.  You just hope that the ump looks at the next pitch a little more carefully.

When the Supreme Court issued Florida v. Harris on February 19, 2013, we found some reason to be hopeful that the Court’s decision would not lead to a decline in the standards of training and testing of narcotics detection dogs, and that field records would continue to be maintained for administrative purposes even though their relevance in criminal prosecutions was largely sidelined by the Court’s perspective.  Justice Kagan, after all, had written that the defendant could “contest the adequacy of a certification or training program, perhaps asserting that its standards are too lax or its methods faulty.”  Also, she acknowledged that field records “may sometimes be relevant.” She had referred to the possibility of undermining the government’s assertion of probable cause from the dog’s alert by providing evidence that the dog had been cued by the handler to alert, though by declaring field records largely irrelevant she had made it difficult for the defense to gather some of the most important evidence that might support a cueing argument.

We did not expect at the time Harris was handed down that some prosecutors would begin recommending field records be minimized, maintained no longer than necessary for administrative purposes, or worse yet destroyed so that statistics could not easily be gathered that might show that dogs were alerting in far more instances than the probabilities of drug use among the population would suggest were likely.  We did not expect that Justice Kagan’s words would be seen by law enforcement as confirming that there was no easier way to get into a car than to call for a drug dog, reliable or not.  As long as the dog gets there in an hour or so, there is probable cause. 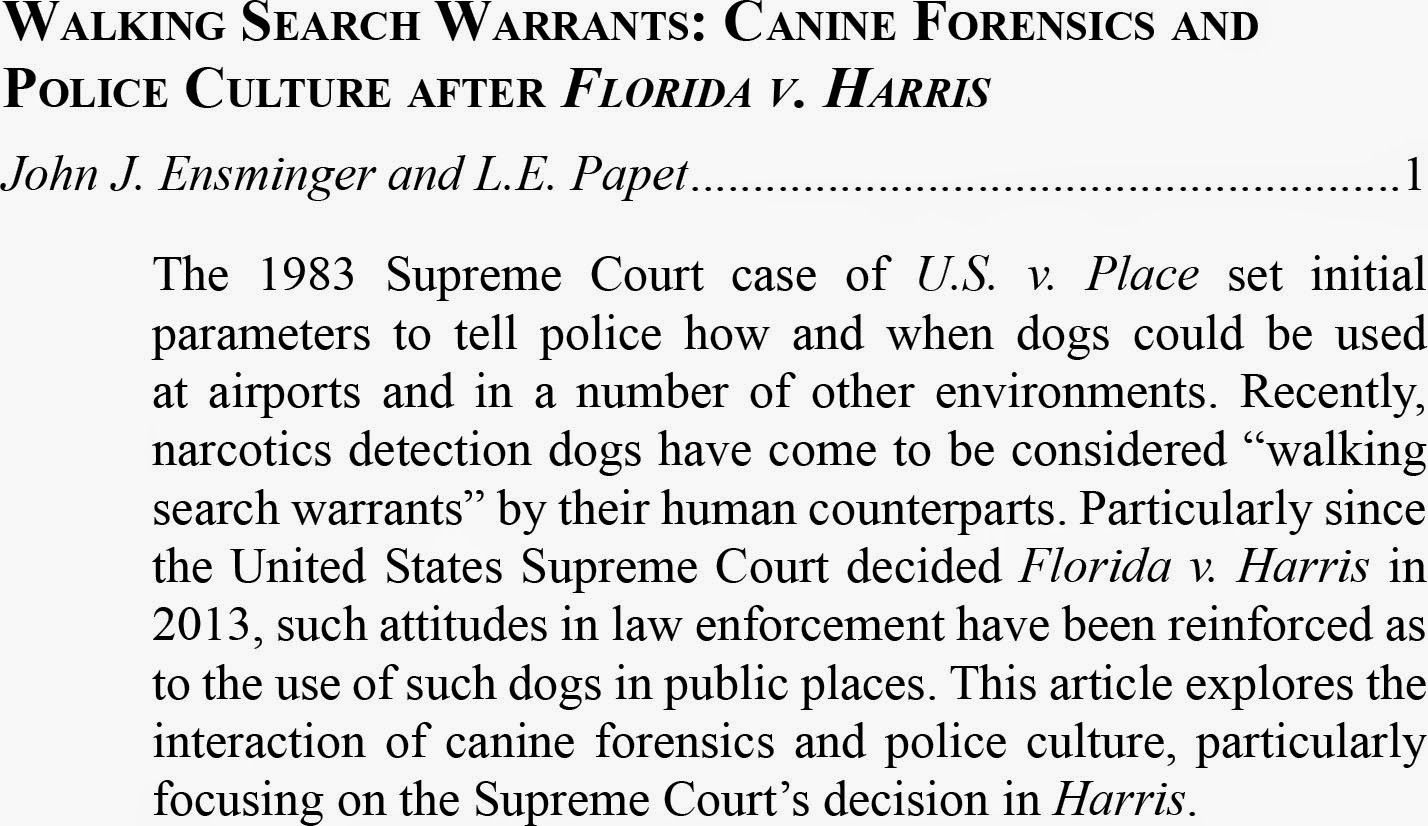 We have been provided a copy of a dash cam video by a reporter with a major newspaper in which a deputy sheriff can be heard explaining to a ride-along, as the officer waits for the arrival of a K-9 team to conduct a sniff of a car he has pulled over on an Interstate, that the safest bet is not to try to justify a search based on circumstantial evidence but rather just to wait for the dog because that makes it easy for the courts, they don’t really need to hear anything else.  The stop involved was on a drug corridor on the side of an Interstate where cash is more often found, as in fact happened, not on the side where the drugs usually move.  The money was the real purpose of the stop.  There was not even any intent to make an arrest, rather just a desire to get the motorist to say that the money was not his, that it had been abandoned, so that it could be forfeited without further protest and thereby supplement the coffers of local, state, and federal law enforcement agencies.  Our analysis of the video suggests the very real possibility of intentional cueing.

The Supreme Court has effectively blessed a shakedown industry that is becoming popular with certain elements in law enforcement across the country.  We explain why this is happening in an article that appeared in the latest issue of the Journal of Animal and Natural Resource Law of Michigan State University.