The relationship between the handler and a detection dog is often of concern because of the possibility that the handler’s thoughts or feelings as to the presence of a target substance may result in a signal to the dog that it is time to alert, a phenomenon known as cueing. When typical drug-related criminal activity is suspected, the handler may intentionally signal the dog to give a trained final response so that probable cause for further action is established.  More often the concern has been that the handler may not be aware that his beliefs are leading to subtle behavioral changes in his management of the dog that result in the dog giving an alert.  (See Cueing and Probable Cause.) Yet the handler’s mental state may influence a working dog’s effectiveness in other ways, as indicated by recent research from Israel.

A team of ten scientists from the Behavioural Neuroscience Lab at the Rappaport Faculty of Medicine in Haifa considered how putting stress on handlers affected the performance of explosives detection dogs.  For purposes of the study, the team sought to distinguish between two possible types of handler stress: external stress, which was defined as stress irrelevant to the task of the canine team, and internal stress that was relevant to the task.  The team studied five Malinois and their handlers working in the Israeli Air Force.  The dogs had been in service about six months, but each handler had at least a year of experience with the dog to which he was assigned.  Salman Zubedat, Shlomit Aga-Mizrachi, Adi Cymerblit-Sabba, Jonathan Shwartz, Joseph Fiko Leon, Shlomo Rozen, Itay Varkovitzky, Yuval Eshed, Dan Grinstein, and Avi Avital (2014).  Human-Animal Interface: The Effects of Handler’s Stress on the Performance of Canines in an Explosive Detection Task. Applied Animal Behaviour Science, 158, 69-75.

To provide a baseline on the level of stress in a handler, a pre-pulse inhibition test was given both before the handler was put in a stressful situation and after a trial was completed.  External stress came from a three-minute conversation with the handler’s unit commander.  After the conversation, a task was performed in which the dog could identify two explosive odors.  In training sessions, however, dogs could detect 1, 3, 4, 5, or 6 explosive odors.  When the dog sat next to a hot spot, it was allowed to play with a ball as a reward.

The search area was long and narrow, a 50 meter line with a two meter width, which teams were given no more than five minutes to search.  The unusual search area may have been chosen to duplicate a street in a dense urban environment where explosive devices might be hidden in buildings against the street or in items like carts along it.  Alerts, false alerts, and misses were to be measured, though no false alerts or misses were recorded (which says a great deal for Israeli military dogs).  Consequently, differences in performance levels of teams were established by measuring the energy levels of the dogs and the time intervals for the trials.

An experimenter hid the explosives before a trial so that the handler and other staff were blind to the location of explosives.  Hides were placed in different orders relative to the exploration direction of the dogs.  Sites were explored from different directions by the teams so as to limit the effect of possible contamination, though the paper says that the “location of the hidden explosives remained constant between the different test days.” (This may have been a design flaw as the amount of odor available to the dog would tend to increase over the period of the experiment.) An alert consisted of the dog sitting near the hot spot and poking its nose towards the exact location of the hide.  Trials were videotaped.

As to what explained this unexpected finding, the research team hypothesized:

“We postulate that the stress disturbed the handlers in their focus of attention and thus led to less control of the dogs’ leash. Consequently, it allowed the dogs to manifest their training outcome in a less ‘handler-dependent manner’. This presumable locus of control transfer may explain the improved performance of the dogs.” 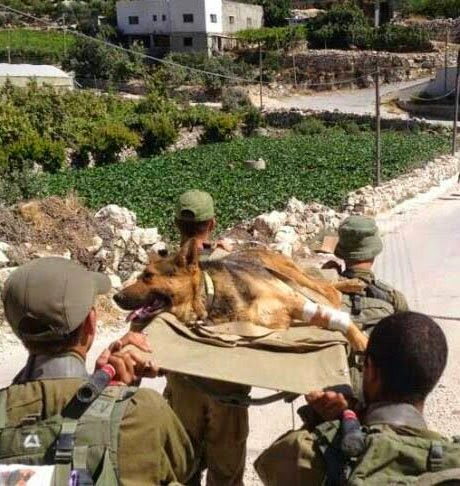 The importance of explosive detection dogs in Israel may be indicated by the size of the team involved in this study. A photograph from a recent military operation shows the value that the Israeli military assigns to the protection and care of military dogs.

The results might have differed had the search area been wider so that the sweep would have required crisscrossing.  Although training sessions could involve various numbers of hides, the scientists chose to use only two hides and perform limited recorded trials.  Having people, including supervisors and other officials, watch the trials might be more stressful for some handlers than others. Different ways of applying stress should be explored since a major difference between the two types of stress was when they occurred in relation to a trial.  Implementing variations on the experimental design will be important to verify the conclusions reached by this team.

Still, the situations presented are clear enough, and the general nature of the findings is quite credible.  A handler with his own problems is less likely to be interested in cueing his dog to alert since he may not want to spend time dealing with a more detailed search or the resultant paperwork from a situation of his own making.  Thus, the research might have applications in a wider range of canine operations.

This blog was written by John Ensminger and L.E. Papet.

Note on the photograph: This picture was provided by a friend in Israel, who advises us that it was sent anonymously from Gaza to an Israeli television station.  This apparently gave the station license to use the picture without giving the station the right to license (or preclude) our reproduction of it here. We believe it may have been reproduced elsewhere.  The anonymity may mean the photographer does not wish to acknowledge the context or is prevented by Israeli military law from asserting ownership.  If, however, someone believes the usage here violates an interest in the work, it will be removed on a credible claim of superior rights.  Anyone wishing to communicate with us regarding a claim as to the rights of the picture is asked to send an email to jensminger@msn.com.
Posted by John Ensminger at 6:15 AM