A Texas court found that there is "little distinction between a scent lineup and a situation where a dog is required to track an individual’s scent over an area traversed by multiple persons.” Winston v. Texas, 78 S.W.3d 522 (Court of Appeals, 14th Dist., 2002). This supposed similarity, almost identity, of tracking and trailing to scent lineups, has been used by courts in applying the same foundational requirements to the admission of both types of evidence. There are, in fact, numerous differences between the two canine functions, and some are significant from a forensics perspective. The following list of differences is probably not exhaustive. Tracking and trailing descriptions are in Roman type, while scent lineup descriptions follow in italics.

1. Dogs trained to follow tracks or trails of targets usually on long, loose leads. Dogs trained in procedures designed to emphasize matching of scents correctly; dogs work either on lead or off lead in testing area.
2. Dogs may be trained in other police dog functions, or may be tracking specialists. Dogs may be trained in other police dog functions, but are generally specialists in European procedures and in the most reliable protocols.
3. Dog ideally scented to object touched by perpetrator but sometimes scented to area where perpetrator likely to have been present; dogs occasionally scented to pads. Dog scented to object likely to have scent of perpetrator or to scent pad created from object perpetrator may have touched.
4. Scent occasionally extracted and enhanced by scent transfer unit. Scent on scenting item and scents in stations of lineup frequently extracted and enhanced by scent transfer unit.
5. Dog more often following foot scent as individual human odor. Dog more often scented to objects touched by perpetrators’ hands but may be scented to item touched by another body part (e.g. elbow, face).
6. Scent source may have been touched by multiple individuals (“missing member” may be performed to eliminate non-suspects); track may have been crossed by multiple individuals. Scent source may have been touched by multiple individuals; lineup design generally precludes scents from individuals other than the suspect and foils in the lineup stations.
7. Dog must ignore cross tracks laid at different times generally by unknown individuals. Dog must choose between objects ideally scented at same time and by individuals of same gender, age, and ethnicity of suspect; objects are generally identical or alike.
8. Dog need not choose any individual but may lead to suspect. Dogs choose between a number of objects scented by target and decoys (in zero trials, no choice is correct).
9. Dogs may work in tandem or in groups. Dogs should always work alone; when trials involve using multiple dogs, equipment generally must be cleaned between each trial.
10. Object of work is to find path taken by perpetrator and find objects perpetrator may have left, and possibly find perpetrator. Object of trial is to determine if suspect was perpetrator.
11. Handler may have to know facts about perpetrator in case he encounters him or her while tracking (particularly if perpetrator may be armed and dangerous). Handler should be unaware of correct station and dog should not be able to see experimenter or other individual who knows correct station during trial.
12. Trail may be followed by more than one team at more than one time. Equipment must be cleaned between trials if dogs may have left saliva at scenting stations.
13. Trail cannot be followed after scent disappears. Test can be performed as long as scents are preserved.
14. Procedure may produce additional evidence (e.g., items dropped or abandoned by perpetrator, locations where perpetrator may have been). Procedure does not produce additional evidence.
15. Tracking occurs in diverse environments; dog may track to a building or vehicle, implicating privacy interests. Procedure generally conducted in police station or other facility.
16. Procedure rarely videotaped. Videotaping increasingly common and often required.
17. Tracking foundational requirements apply. Tracking foundational requirements require adaptation or ignoring (e.g. putting on track where perpetrator likely to have been; tracking continuously).
18. Cueing the dog generally only possible if suspect is encountered; dogs may sometimes be forced to follow a path against their inclination. Cueing the dog possible if the handler or other participant in the lineup visible to the dog knows the position of the suspect’s scent in the lineup.
19. Dog may have to be rescented if it loses trail or becomes distracted. In optimal protocols, dog will will not be rescented during trial.
20. Environment of tracking generally cannot be controlled beyond limiting interference of other investigators or bystanders. Environment should be highly controlled to avoid contamination and cueing.

I’ve discussed the distinctions between tracking and scent identification in a working paper posted on the Social Science Research Network (SSRN), Canine Tracking and Scent Identification: Factoring Science into the Threshold for Admissibility.

For a detailed discussion of the state of the law and research on scent lineups, see another working paper, Scent Identification in Criminal Investigations and Prosecutions: New Protocol Designs Improve Forensic Reliability, by Tadeusz Jezierski, Michael McCulloch, and me, also posted on SSRN.

The authors would appreciate comments on both of these papers. Please send comments on either paper to me at jensminger@msn.com.
Posted by John Ensminger at 6:51 AM

From Hunters to Hell Hounds 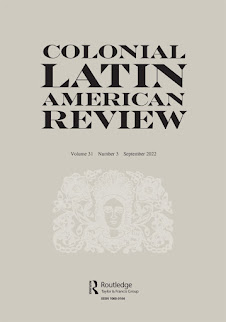 Dogs in the Economy and Operation of the Peculiar Institution 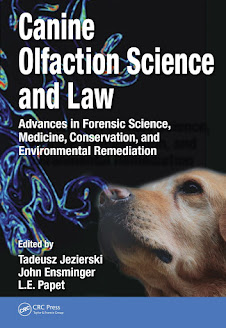