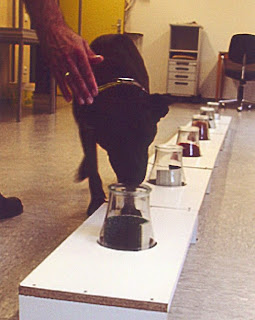 A German research team was asked by the Hamburg Police Department how long a dead body would have to have contact with a mattress or a carpet for a cadaver dog to detect that a body had been on the item. This question arose from a real case involving a married couple that went sailing in their yacht. The husband returned alone and reported his wife missing, but the police soon regarded him as a suspect. They brought a cadaver dog onto the yacht, which alerted in the cabin. Although this would not have been enough for a conviction, the researchers argued that it justified further investigation. They designed an experiment to answer the question of the Hamburg police. Two men who had died only two hours before were wrapped in cotton blankets. Carpet squares were placed under their backs, touching the blankets but not the bodies. The squares were left under the men for either two minutes or ten minutes, then removed and placed in sealed containers. Carpet squares were also placed under living men, also without direct contact. The carpet squares were then used in a test of the skills of three cadaver dogs of the Hamburg Police Department, two Malinois and a herding dog. One of the Malinois had five years of experience, while the other two had about a year and a half. They were tested the day of the exposure, but up to 35 days later for the two-minute exposed squares and 65 days for the ten-minute exposed squares. The dogs sometimes failed to identify the two-minute squares, but two of the dogs were perfect on the ten-minute squares. Collectively the dogs alerted accurately 86% of the time on the two-minute squares and 98% of the time on the ten-minute exposed squares (with only one dog have any incorrect alerts). The message to the criminals apparently is, if you’re going to move a body, do it quickly or the dog will find you out. L. Oesterhelweg, S. Krober, K. Rottmann, J. Willhoft, C. Braun, N. Thies, K. Puschel, J. Sildenath, and A. Gehl, “Cadaver Dogs—A Study on Detection of Contaminated Carpet Squares,” 174 Forensic Science International 35-39 (2008).

Additional Note.  A recent article discusses a dog trained on detection of bones hundred of years old.  A scientific evaluation of this report would be useful.
Posted by John Ensminger at 7:10 PM