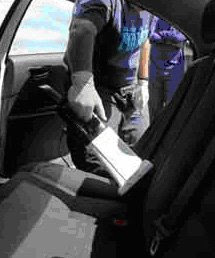 A professor and a member of the San Bernardino police department determined to test the tracking abilities of bloodhounds that had received more than 18 months of training against bloodhounds that had received less training. They obtained four dogs in each category and performed the following test. Subjects down trails from a half mile to a mile and a half long in five separate areas at five separate times. Two of the areas were in regional parks, a third area was a college campus, and two of the areas were in downtown San Bernardino. The subjects laid down the trails 48 hours before each dog was brought to the starting point of a separate trail. The subjects were given maps which showed them where to begin and where to end. With each subject was a partner whose scent would not be given to the dog. About 50 feet from the end point of a trail, the subject and the partner would separate and find a place to hide behind an object, such as a tree or a building. After standing in this location for about ten minutes, the subjects and the partners were driven away by a car which did not cross the trail they had laid at any point. Two days later, when the dogs were brought to the beginning point of each trail, the subject and the partner were brought back to hide in the locations where they had previously stood for ten minutes. Neither the handlers nor the researchers watching the dogs work knew where the trails went or which subjects the dogs were supposed to alert to. Scent had been taken from each subject using a scent transfer unit (STU-100, see picture), which put the subject’s scent on a gauze pad. The dog was allowed to smell the gauze pad (with no other contact with the subject) at the beginning of the trail, then commanded to TRAIL. Most of the trails had been crossed by hundreds if not thousands of people between the time the trails were laid and when the dogs began to track. At one regional park, a trout fishing contest meant more than 1,000 people had crossed the trails. The trails on the campus and in downtown San Bernardino involved tracking on cement and asphalt. Rain had fallen before the first trails were laid. Of the 20 trails that the younger, less experienced dogs followed, 12 were run to completion, with the subject found by the dog. One dog identified a partner rather than a subject in one trial. Of the 20 trails followed by the veteran dogs, however, 19 were run to completion with the subject alerted to. The researchers noted the following concerning the single veteran dog failure. “The one veteran bloodhound that did not make the find was distracted by a foul smelling dumpsite that was located about 300 yd off the trail. The handler was not able to keep the dog’s attention on the trail and decided to stop his dog. Once the dog was walked a substantial distance from the dumpsite, she continued the trail and made the find.” The researchers suspected that the poorer performance of the younger dogs was in part due to their less mature neurological systems. The two youngest dogs in the experiment were only 10 and 11 months old, respectively. Within three months of the test, both had improved to a level of 100% on subsequent tests. Lisa M. Harvey and Jeffrey S. Harvey, “Reliability of Bloodhounds in Criminal Investigations,” 48(4) Journal of Forensic Science 811-816 (July 2003).
Posted by John Ensminger at 6:52 PM