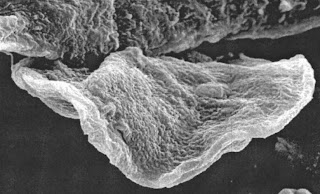 We shed 30,000 to 40,000 skin flakes each minute. (Picture shows electroni microscope image of a desquamated skin flake, at least a thousand of which you'll shed by the time you finish reading this piece.) Clothing is permeable to this particle stream and it comprises between 70% and 90% of house dust. These skin flakes spread up and out from the body by heat and air currents in a pattern known as a plume, and are a major part of the scent trail that a tracking dog follows. (See Gary S. Settles, “Sniffers: Fluid-Dynamic Sample for Olfactory Trace Detection in Nature and Homeland Security—the 2004 Freeman Scholar Lecture,” 127 Journal of Fluids Engineering 189 (March 2005); Robert Hunt, “The Benefits of Scent Evidence,” FBI Law Enforcement Bulletin, p. 15 (November 1999).) How the olfactory systems of dogs work is a study in itself, as are the fluid dynamics that describe the dissemination of the plume—how far and how quickly it spreads. Dogs can generally find scent trails within 48 hours after the target has been in an area but much longer periods have been reported. An FBI newsletter describes a case where a bloodhound followed a trail from a car abandoned 17 days earlier to a suspect’s apartment building. This dog was even able to follow the 17-day old trail into a commuter station to a kiosk where the suspect caught a bus. The dog was thus able to ignore the scents of thousands if not tens of thousands of commuters in tracking the suspect. (Guy J. Hargreaves, “Detection Dog Lineup,” FBI Law Enforcement Bulletin (January 1996).) Another area of research on dog scenting concerns the dog genome. In 2008, a team of Polish scientists determined that variations in olfactory receptor genes “might affect the olfactory ability of service dogs in different fields of specific substance detection.” Twin dogs with a specific gene variant were able to track better than other dogs with different variants of the gene. (A. Lesniak, M. Walczak, T. Jezierski, M. Sacharczuk, M. Gawkowski, and K. Jaszczak, K., “Canine Olfactory Receptor Gene Polymorphism and Its Relation to Odor Detection Performance by Sniffer Dogs,” 99(5) Journal of Heredity 518-527 (September/October 2008).) Thus, it might soon be possible to predict, both for cancer sniffers and other detection dogs, whether a puppy is a good candidate for such work. It might even be possible to select for genetic predisposition to high tracking skills in breeding programs. Whether that kind of dog breeding will be a good thing I am not sure, but I have no doubt that someone will make it part of a breeding program sooner or later.

Posted by John Ensminger at 9:03 AM