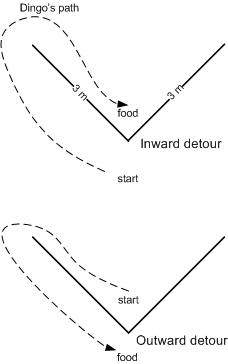 In 1699, sailors coming ashore in Australia saw their first dingoes and assumed they were starving wolves. Early settlers, fearing for their sheep, described dingoes as cunning and used the same tactics sheep farmers everywhere else use against wolves. A recent cognitive experiment shows that dingoes are able to solve problems much in the way that wolves do, yet dingoes are dogs, and were almost certainly at one time domesticated to some degree.

A recent study (by two authors about whom I've blogged before, see May 19, 2009) shows that in solving problems, dingoes may think more like wolves than they do like dogs. The detour task uses a V-shaped fence with each arm of the V three meters long and 1.2 meters high, the two sides joined at a 90 degree angle, as shown in the diagram. In the "inward detour" task, a food bowl is placed in the inside angle of the V. After the handler shows the food to the dingo through a wire mesh door near the intersection of the arms of the V, the animal is unleashed so that it can get to the food. To do this, the dingo must go around one end of the fence or the other, going the length of one arm of the V then turning back towards the crook of the V. If it does so, it gets to eat the food. In the outward detour task, the dingo is placed in the crook of the V and shown the food on the outside. Again, to get to the food the dingo must run along one arm of the V and then come back on the the other side. In either the inward or outward task, the dingo must for some distance get further away from the food rather than closer. An effort to go directly to the food is precluded by the fence.

The twenty dingoes used in the experiment all completed the task in less than a minute, generally in less than 12 seconds. Domestic dogs are not nearly as good at this and many fail to detour within 60 seconds in the first trial. Dogs find the inward detour more challenging than the outward detour, which may mean they more commonly face escape tasks in their environments (the outward detour resembles getting out of a box or a pen, whereas the inward detour is more like going into one). Dogs also look to humans for guidance as to what to do, an indication that they have learned to rely on us for guidance. Dingoes, even if they were originally domesticated, have long since lost any tendency to rely on us. Some wolves were tested in a similar arrangement in the 1980s and were also found to be much better at the task than dogs. Thousands of years of feral status was apparently enough to return dingo cognition to a wolf-like state.

I discussed the detour task in Service and Therapy Dogs in American Society because it is relevant to understanding dog-human communication, and explaining how this communication underlies the therapeutic benefits dogs can provide for us.

That dingoes think like wolves does not mean they are wolves. They are in fact dogs, though they probably did not interbreed with other dogs for thousands of years until the European settlers arrived several hundred years ago. The species is called either Canis dingo, or Canis lupus dingo. In form, dingoes resemble South Asian domestic dogs but are also similar to Indian pariah dogs. The earliest archeological skeletal remains date from 3,500 years ago. Since dingoes are not found in Tasmania, which separated from Australia by the rise of the sea level about 12,000 years ago, the assumption has been that the animal arrived in Australia more than 3,500 years ago but less than 12,000 years ago. To arrive from Asia in that period, the dingo would have had to cross at least 30 miles of open sea by any route, making it most likely that the animal’s ancestors came with humans traveling in boats.

In a study headed by Peter Savolainen, the leading canine genome researcher of our time, mitochondrial DNA was obtained from 211 dingoes by a research group that published in 2004. The mtDNA sequences were compared with those from 676 dogs from around the world. The divergence was then calculated to estimate the time of the arrival of dingoes in Australia. Prehistorical archeological dog samples were also obtained from Cook Island, New Zealand, and Hawaii. The variation of the genes analyzed to determine the divergence was much less among dingoes than among dogs and wolves. The conclusion was that dingoes arrived in Australia between 4,600 and 5,400 years ago, though earlier introduction is possible if the timeline of the separation of dogs from wolves is assumed to be two million years, as opposed to the general assumption of one million years.

The researchers concluded that the dingo population was formed from very few dogs, even possibly a single pregnant female, a Dingo Eve, though a larger group would be possible if the entire group had lost genetic variation before arriving in Australia. The results also indicated that there appear to have been no other dogs arriving in Australia until European settlers landed. The genetic similarity to New Guinea singing dogs suggests a common origin and gene flow between the two populations for some period cannot be ruled out. The researchers also determined that an East Asian, rather than an Indian, origin of the dingo was most likely. The time frame would correlate with the expansion of the Austronesian peoples, who had domesticated dogs, pigs, and chickens, and who brought these animals with them to many islands of the South Pacific.