Guide Dog in Chinese Scroll from 1516? 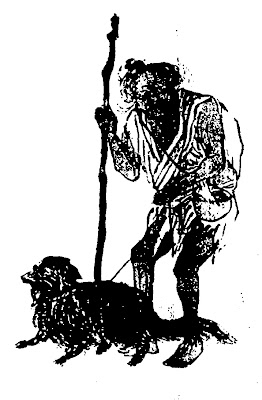 Artistic depictions of blind people relying on dogs for some level of guidance have been argued in a number of cases, although the painters were probably more interested in contrasting the misery of some with the wealth of others, or in showing the wages of sin. See my discussion of a fresco from Pompeii on July 19 (Guide Dog in Pompeian Fresco?).

A poor man with his dog in a Chinese scroll has come to my attention. The scroll dates from 1516, and includes depictions of several street people, one of whom may be blind. The painter, Zhou Chen, said the figures were “a warning and admonition to the world.” The figure that interests me in this connection, shown here, is of a man holding onto a leash to his dog, a staff in his right hand. The dog is holding his head back, as if defensive or preparing to snap at a goat that is also on a leash, held by another man to the left of the portion of the scroll shown here. The person holding the goat is looking at the man and the dog, his mouth open, perhaps gaping at the dog or yelling at the man in fear or anger at the dog’s accosting of his goat. The man holding the dog has his head away and slightly down, as if listening to the other man’s reaction rather than looking at him.

As was true of the Pompeian fresco, such proto-guide dogs would not have been formally trained, but would rather have combined their senses with those of the master so that the two could navigate a path through their world. As noted by Father Navarette in his Account of the Emperor of China, describing his travels in the 17th century, blind men in China would train dogs to dance and play tricks as a way of getting alms.

The figures can be seen in Valerie Hansen (1996). The Mystery of the Qingming Scroll and Its Subject: The Case Against Kaifeng. Journal of Sung-Yuan Studies, 26, 183-200. A color print of the painting can be seen in Jay A. Levenson, Circa 1492: Art in the Age of Exploration. Yale University Press (1991), at 443. Thanks to Meredith Nelson of the Department of Asian Art of The Metropolitan Museum of Art for suggesting some sources that led me to finding this painting.
Posted by John Ensminger at 8:43 AM