Bomb Dogs More Effective Than Manual Screening at Ferries, but Cost Three Times as Much 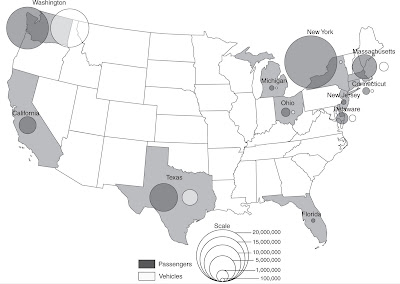 U.S. ferries annually carry over 80 million passengers and 25 million vehicles. They are potential targets for terrorism, and ferry systems have been hit by terrorists overseas. The Transportation Security Administration supplies Visible Intermodal Prevention and Response teams to ferry systems. Some of these VIPR teams include explosives detection canine teams (a handler and a dog). TSA has deployed 319 VIPR units to ferry systems in almost four years, but it is not clear how many of these units included canine teams. Statistics have not been provided as to how many canine teams work in the ferry system on any given day, but it seems likely that only a small portion of people, luggage, and vehicles going onto ferries are actually sniffed by dogs. The map shows areas with significant ferry services in the U.S. (Dark circles show human passengers; light circles show vehicles. Washington State has a high level of cars on its ferries.)

In a report published this month, the Government Accountability Office evaluated security at ferry systems using canine and manual screening. Some ferry systems use walk-through metal detectors and baggage belts. The GAO noted that the Coast Guard believes that canine screening is “a reliable and proven method for detecting concealed explosives.” The Coast Guard has stated that “canines provide advantages of superior mobility and the ability to follow a scent directly to its source—citing that canines have a higher probability of detection compared to manual, x-ray, and trace detection methods.”

The description of following a scent to its source may be (or may not be) a reference to Auburn’s now-trademarked Vapor Wake Detection Program, which the GAO has described recently. See Technology Assessment: Explosives Detection Technologies to Protect Passenger Rail, GAO-10-898, p. 42 (July 28, 2010). On November 16, 2010, Auburn was granted trademark rights to the phrase, Vapor Wake. (I have some concern that Auburn’s trademarking of this phrase may induce other training organizations to seek protection for phrases used in marketing and online materials. Some of those phrases may be used by other organizations, meaning that everyone will have to check whether their use of a phrase has become problematic because of someone else trademarking it.)

A dog’s alert allows a ferry to take further action. According to the GAO:

"[S]tate police officers who perform canine screening at one ferry system we visited reported that state case law generally prohibits them from opening a vehicle trunk without the driver’s consent or a search warrant. However, when a canine detects a potential threat associated with a vehicle and the driver does not consent to trunk screening, officers notify the ferry captain. Under the ferry system’s security procedures, anyone denying such a screening will be prohibited from boarding, preventing a potential risk from boarding the ferry."

The Coast Guard has estimated, however, that canine screening is over three times more expensive than manual screening, with a startup program for two handlers and two dogs costing about $250,000. This apparently means that the training phase of the handler, and the expenses related to a dog before deployment, amount to about $125,000. One port security official estimated that the cost of one system’s four canine units per year was $160,000, meaning that a single team costs about $40,000 a year (at least at one location, probably in the South where handler salaries are lower).

The GAO should have investigated how a calculation was reached that canine screening is so much more expensive than manual screening. This seems to be something of a comparison of apples and oranges. For instance, if a ferry takes automobiles, it would be far more time-consuming, likely less thorough, and certainly more Constitutionally suspect, to manually search every car than to walk an explosives detection dog through the vehicle hold. The generally less intrusive nature of drug and explosives sniffs—sui generis as Justice Sandra Day O’Connor described it 27 years ago in U.S. v. Place, 462 U.S. 696 (1983)—continues to explain why canine teams have procedural and often economic advantages over other criminal investigation techniques. (O’Connor’s Latin phrase, sui generis, has never stopped reverberating through the case law of canine sniffs; see the opinion of Justice John Paul Stevens in Illinois v. Caballes, 543 U.S. 405 (2005), concerning automobile sniffs during a legitimate traffic stop.)

Cost issues would, of course, become somewhat secondary if a U.S. ferry were to become a terrorist target.

No uniform standards exist for non-federal canine teams used for screening at ports, though federal project bids will usually include requirements and the captain of a port may have to approve a contractor. Coast Guard officials informed GAO that DHS is currently evaluating the feasibility of developing standards for nonfederal canine programs. (Participants in TSA’s Transit Security Grant Program and DHS’s Homeland Security Grant Program must satisfy SWGDOG guidelines.)

Additional Notes. On December 22, according to the Atlanta Journal-Constitution, federal agents conducting a sweep around Hartsfield-Jackson Atlanta International Airport found men hiding in a truck at the Delta Airlines cargo facility. It was the second night of a Visible Intermodal Prevention and Response operation focused on trucks carrying cargo to be loaded on planes. No specific threat prompted the operation. Bomb dogs, a radioactive detector, and an x-ray device were brought but no explosives were found. This indicates that VIPR teams often involve deploying multiple modalities. DHS also summarized the incident in its daily report.  The TSA Blog for August 22, 2013, indicates VIPR teams are not being cut back, at least in rail environments.
Posted by John Ensminger at 8:37 AM