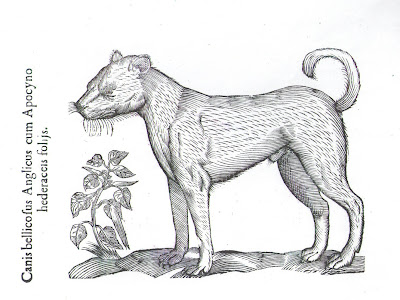 When my father was writing The Complete Book of Dogs in the 1970s, he asked me to look into the histories of breeds of dogs. He felt that some breed associations were seeking an antiquity for a breed that the evidence did not support. Nevertheless, we agreed that the book would not contradict an association’s materials unless there was clear evidence that the association was insisting on a history against solid evidence to the contrary. In a table of 113 breeds, he had a column labeled “place of origin,” in which he sometimes referred to a breed’s origins as “clouded in obscurity” or “shrouded in mystery” or some such evasiveness when either he or the association admitted to ignorance.

With the advent of genome studies, it is now possible to say a great deal about the genetic proximity of various breeds. If archeology uncovers bones from which DNA can be extracted, it may even become possible to analyze genetic variations in populations of dogs at various periods. A rigorous study is needed to compare reliable evidence of breed separation against genetic variability, and as I take notes for a possible revision of my father’s book, this is one area I’m hoping to cover better than we could three decades ago.

My father suggested that we look at drawings made by early naturalists, not just Linnaeus, in order to categorize the appearance of dogs hundreds of years ago. I gathered some materials but deadline pressure for the book prevented us from pursuing this effort. One work that provides some insight into breeds is the natural history of Ulysses Aldrovandus, De Quadripedibus. Aldrovandus (1522-1605) helped build Bologna’s botanical garden and collected thousands of plant and animal specimens.

Aldrovandus included sketches of 15 dogs in the over 100 pages he wrote about dogs, dividing breeds according to function and finishing with dogs that were inutile, useless—i.e. pets. ("They bark very readily and their only occupation is devouring food.") I have reproduced all 15 drawings in a document now available on my dog law website. I hope this may be useful as I have not found the plates reproduced in an accessible fashion and there are only three full sets of Aldrovandus in the Western Hemisphere, one in Mexico City, one at Berkeley, and one in the New York Public Library. My thanks to the latter for making copies of the dog drawings.

The picture here is that of Canis bellicosus Anglicus—Latin meaning “English war dog,” a term for mastiffs. When Mark Antony invokes Caesar's ghost to "let slip the dogs of war," this is likely the dog Shakespeare had in mind. Julius Caesar, Act III, scene 1. Shakespeare did not see them in battle, however, but rather at the Bear Garden near his house, where bear and bull bating with dogs occurred on Thursdays.

York:
Call hither to the stake my two brave Beares,
That, with the very Shaking of their Chaines,
They may astonish these fell lurking Curres....
King Henry VI, Part II, act v, scene 1

Carl Linnaeus referred to this breed in his classification of animals, Systema Naturae (1758-9). In antiquity, Julius Caesar would not have encountered English mastiffs in battle, but the ancient war dog, the Molossus, is thought by some to have been similar to the mastiff, and various arguments have been made for a genetic connection, including that Roman legions, or even Carthaginian sailors, brought Molossian dogs to Britain where they interbred with local dogs to produce the mastiff.

The mastiff was the dog about which the king was most concerned regarding inhabitants of the forests, and for which English law required forepaw mutilation. I also believe that the woodcut of the night watchman in London (blog of November 11, 2010) shows a mastiff. 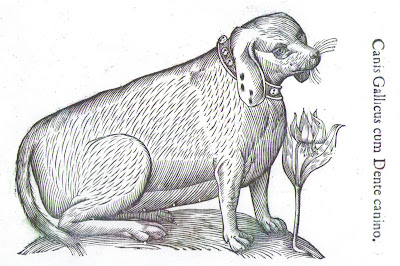 In addition to the mastiff, Aldrovandus included drawings of several spaniel-like dogs, short- and long-haired greyhounds, bird dogs, and a very fat French dog (Canis gallicus). Greyhounds were popular with the nobility for their ability to catch game. All dogs are depicted by Aldrovandus with a plant, the mastiff with a species of dogbane. Aldrovandus also had long chapters about wolves and foxes in De Quadripedibus. In addition to writing about real animals, Aldrovandus described dragons and sea monsters.

Thanks to The American Kennel Club Library for providing me with the translation of portions of Aldrovandus on dogs, which is contained in an Appendix XIV of Edward Ash, Dogs: Their History and Development (London 1927).
Posted by John Ensminger at 11:16 PM