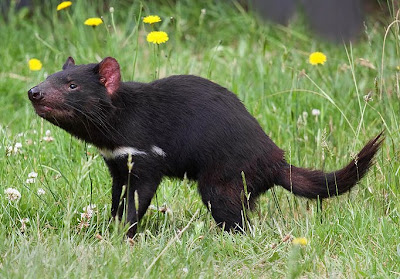 Dogs transmit canine transmissible venereal tumor (CTVT) when having sex. The infectious agent is the cancer cell itself. This is unusual. Early research had expected to find a virus or some other agent that induced the cancer in dogs, but this turned out not to be the case.

Analysis of the DNA of the disease indicates that it began from 6,000 to 10,000 years ago. Scientists from the Department of Life Sciences of the Imperial College London, and one originally from that school but now at the Cold Spring Harbor Laboratory on Long Island, sequenced mitochondrial sections of CTVT tumors and found the level of variation (nucleotide polymorphism) to be high, which they believe may be due to the occasional transfer of mitochondria from host dogs into CTVT, that in other words “CTVT lineages periodically acquire the mitochondria of their hosts.” The advantage of this exchange to the tumor is that its own mitochondria will in time accumulate deleterious mutations, “with transfer events rescuing CVTV mitochondrial function.” A result of this exchange is that the nuclear DNA of the tumor is different from the mitochondrial DNA, with the latter showing sequences taken from dog mitochondrial DNA.

This is the first time this sort of mitochondrial transfer between a cancer and a host has been demonstrated in nature (as opposed to laboratory studies). The researchers speculate, however, that the use of a host’s mitochondrial DNA may occur in other cancers, concluding their paper with the statement:

“Because sporadic cancers often show mitochondrial mutations and have unusual metabolism of aerobic glycolysis that may be due to accumulated defects in oxidative phosphorylation, mitochondrial transfer may occur in many cancers as they seek to optimize, or at least repair, their metabolic machinery.”

CTVT is also found in wolves and coyotes, and a 2009 paper by some members of the same team and others argued that the origin of the cancer could be found in either dogs and wolves, and may have arisen when dogs were first domesticated. CTVT can be transplanted into foxes and jackals. Although the tumor has existed for thousands of years, the common ancestor of the tumors that have been sampled is only a few hundred years old.

A study from 2006 reached somewhat different conclusions, arguing that “CTVT most likely originated from a wolf or an East Asian breed of dog between 200 and 2500 years ago.” Although East Asia would be consistent with Dr. Savolainen’s location of the original domestication event, the timeframe from the 2006 study would not be consistent. The paper had noted:

“Since CTVT is an asexually reproducing cell that cannot 'cleanse' its genome of accumulated deleterious mutations through recombination, it may be expected that, over evolutionary time, its genome may suffer from slow degradation through the process of Muller’s ratchet…. However, there is no evidence that Muller’s ratchet has yet exerted an effect.”

The mitochondrial research seems to indicate a mechanism by which the cancer avoids this degradation.

Professor David Cohen of Ben Gurion University, writing in 1985, speculated about why the disease exists in dogs:

“Such a tumor developed in the dog and not in other species, probably because of some unusual characteristics of canine coitus. Following coitus in the dog, injuries of the vaginal and penile mucosa occur, thus providing the bed for tumor transplantation.”

A transmissible cancer has also been found in Tasmanian Devils, a carnivorous marsupial, which is spreading quickly and endangering the species. Devil facial tumor disease (DFTD) is highly disfiguring and is transmitted between Devils by biting. The disease was first observed in 1995 in northeastern Tasmania and may lead to extinction within 25 to 35 years. Nineteen researchers, many from Australia, including the lead author of the CTVT study, studied the DNA, and concluded that the tumor is a peripheral nerve sheath tumor that may be similar in transmission to CTVT. The picture shows a Tasmanian Devil.

Dr. Rebbeck, lead author of the 2011 study, according to a podcast interview released by Science, is now working on a study to establish the full genome of the mitochondrial DNA of CTVT to find any more relationships between dog and disease mitochondria. I hope that the geographic origin of the disease continues to be investigated, given that Dr. Rebbeck's research puts this not long after domestication. Since a wolf pack will generally have only one mating pair, domestication, with its resultant multiple partner pattern, was probably necessary for such a disease to spread.

Picture courtesy of Wickipedia and “noodlesnacks.”
Posted by John Ensminger at 6:49 AM