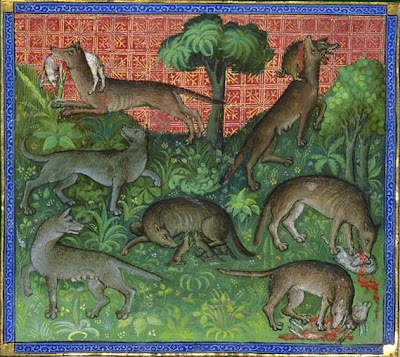 There is a great deal of legal activity regarding the wolves of the Northwest and, as of this writing, the biggest ball lies in the court of federal district court judge Donald Molloy. A footnote to the future of wolves in Montana concerns a population of only 24 wolves in a 707 square miles of wilderness area in and around the Bitterroot National Forest near the Idaho border.

On March 29, the Fish and Wildlife Service of the Department of the Interior published a “notice of availability” in the Federal Register (76 Fed. Reg. 17439; see also 76 Fed. Reg. 7875, February 11, 2011, regarding the Lolo Elk Management Zone). What was made available was a draft environmental assessment of a proposal by Montana’s Department of Fish, Wildlife, and Parks to "lethally take" wolves in the West Fork Elk Management Unit (EMU) in western Montana in response to impacts on elk populations.

Montana recommends reducing the wolf population of about 24 animals in the West Fork EMU to a minimum of 12 wolves in two or three packs for a period of five years. Montana’s proposal could be denied, but the wolves in the area could still be killed by the U.S. Fish and Wildlife Service, or its designated agents, though only when livestock, stock animals, or dogs are being killed by the wolves. The West Fork EMU is one of 35 elk management units in Montana.

The U.S. Fish and Wildlife Service is seeking written comments on Montana’s proposal, but only if they are received by April 12. Electronic comments must be submitted by 11:59 p.m. EST on that date.

Four subspecies of gray wolves (Canis lupus) were designated as endangered under the Endangered Species Act of 1973 (16 U.S.C. Chapter 35; 39 Fed. Reg. 1171 (January 4, 1974)). In 1978, the listing was changed from a subspecies listing to a species-level listing in the contiguous U.S. (43 Fed. Reg. 9607, March 9, 1978). In 1994, the Fish and Wildlife Service designated portions of Idaho, Montana, and Wyoming as two nonessential experimental population areas. Experimental populations are generally treated as threatened species, allowing for certain protections under the Endangered Species Act (16 U.S.C. 1539(j)); 50 CFR 17.40(n)(1)). In 1995 and 1996, the Service reintroduced wolves into the northern Rocky Mountains as a nonessential experimental population, an effort described in a comprehensive environmental impact statement.

The reintroduced wolves, which had been captured in Alberta and British Columbia, “achieved biological recovery objectives in 2002 in Idaho, Montana, and Wyoming," according to the Service. In 2005, State and Tribal governments were given post-delisting management plans a role in gray wolf management, including the capacity to kill wolves, including the ability to do so if the wolves were having an “unacceptable impact” on wild ungulate populations (deer, elk, moose, bighorn sheep, mountain goats, antelope, and bison). Any proposed killing must be “science based” and must “not contribute to reducing the wolf population in the State below 20 breeding pairs and 200 wolves, and will not impede wolf recovery.”

I know the country, or rather the country a hundred miles to the east. In the summer of 1965, I worked on a cattle ranch near Three Forks, a small town between Bozeman and Butte, building haystacks. The ranch had a summer range to the north near a place called Deer Park, and would every spring have a small cattle drive, a hundred head or so, up into the mountains, and every late summer a small drive back to the lower country. The rancher and his men took rifles to the summer range for deer and moose, and supposedly for wolves, though none had been seen in the area for more than a decade. They hunted with single-shot rifles and only the rancher had a scope. I hate to think what weapons technologies will be used on the wolves now.

Hunting wolves has never been about eating them (in most cultures), and has always been about what they eat. Most often we hear about them killing livestock, but even long ago there was anger about their eating game, game we don’t want to share. The plate from the book by Gaston Phoebus, printed in the book he wrote on hunting over 600 years ago, shows wolves (les loups) carrying away and then eating sheep, goats, and a small wild boar. The wolves that are not eating are waiting hungrily for their chance at the flesh. Even the mother wolf at the center seems more interested in her next meal than in her cubs. In an actual pack, part of the kill would have been brought to the nursing female (not that Phoebus could have known that).

Grisly images of wolves have always justified their destruction. We hunt them because they are competitors. The bounty of the earth is for us, not for them. Never mind that we are the ones doing so much to destroy that bounty.

Addendum. On Saturday, April 9, 2011, Judge Donald Molloy declined to delist wolves. Unfortunately, Representative Mike Simpson (R-Id) managed to get a rider in the budget bill which allows Idaho and Montana to resume state management of wolf populations, including hunting seasons. It can only be hoped that state authorities will make an effort to keep wolves from becoming extinct (though it must be doubted whether any official that is too protective of wolves would be able to keep his job very long).

For a description of wolf packs in the northeast, see the U.S. Fish and Wildlife Service, Northern Rocky Mountain Recovery Program Update (2010).
Posted by John Ensminger at 10:22 AM