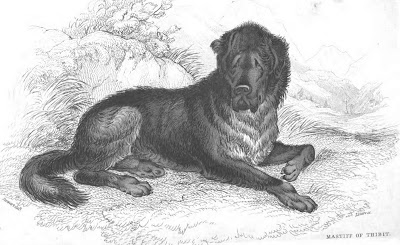 Molossian dogs were thought by the ancients to come from the region of Epirus, north of the great Greek city states, an area presently divided between Greece and Albania. Greek mythology explained the Molossian, but also other ancient breeds, as a descendant of Laelaps, a dog given to Europa by Zeus.

Reliefs from Ninevah show similar dogs, which the website of the British Museum describes as mastiffs. Otto Keller thought these dogs descended from large dogs found in Tibet, and believed they lost their shaggy hair when they descended to the plains of Mesopotamia. Laufer's objections to Tibet as a source of Molossians, and his suggestion that Turkish tribes may have first used the dogs, deserve more attention.  The drawing of the Tibetan mastiff here was included in Hamilton Smith's Dogs, published in 1840.

The Molossians of Greece may not have been directly related to those of the Near East, and even in Europe the dogs called Molossians may have originated in several areas. Molossians may have been taken to England by Roman soldiers, and after being left to their own resources when the legions abandoned the island, bred with local dogs and evolved into the English mastiff, known in medieval Latin as the English war dog (Canis bellicosus Anglicus) 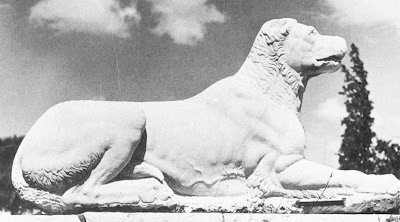 Were Molossians bred for war? D.B. Hull and J.K Anderson both suggest that they were guard dogs for flocks at first. Such dogs are to be distinguished from herding dogs, and are now represented by a number of breeds including the Hungarian Komondor. The isolation of the mountainous areas of Epirus, or of other regions, with the need to develop a dog that could provide protection against wolves and other large predators, could explain how this type of dog separated so substantially from other types of dogs. Selective breeding would have been difficult in urban areas where armies were assembled for campaigns and the need for war dogs would have only been intermittent, making long-term planning unlikely. Another argument, however, may be that, at least in the Near East, dogs like Molossians were bred for royal hunts against large and dangerous game, such as lions. Positing such a breeding program, however, seems to require an early and sophisticated understanding of the plasticity of dog phenotypes, for which there is no evidence. The ancients tended to explain unique breeds as crosses with other animals. Aristotle, for instance, thought the Laconian dog resulted from crossing a dog with a fox (έξ άλώπεκος καί κυνος οί Λακωνικοί), the Indian dog perhaps from crossing a tiger with a bitch. Aristotle correctly recognized that dogs could breed with wolves, something which explained certain animals at Cyrene (Saluqis?). History of Animals, 8.28.

Molossians were mentioned by a number of ancient authors (Grattius, Oppian, Nemesianus, Pollux) and are represented in funerary monuments from the Near East across the northern Mediterranean. Aristophanes alludes to Molossians being used to guard the women’s quarters of a household (Thesmophoriazusae, 416: “kept to frighten off the adulterers.” Translation of Eugene O’Neill, Jr.).

The picture above taken by a photographer of the German Archaeological Institute at the Kerameikos Cemetery in Athens and labeled a Molossian by D.B. Hull, dates from the fourth century BC. The dog appears leonine, with a conspicuous mane and a tassel at the tip of the tail. The artist may have been reflecting the belief of the ancients that dogs could be crossed with lions. The sphinx-like posture may also reflect this belief. The Jennings Dog in the British Museum, generally thought to be a Molossian, also has a mane. A statue at the Vatican Museum may indicate a tassel at the tip of the tail as well. It may not be irrelevant that both Aeschylus and Sophocles referred to the monstrous Sphinx as a dog (κυων) (Lilja 1973, 58-9). 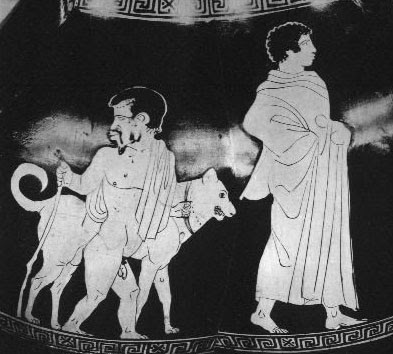 A vase in the Boston Museum by the Dwarf Painter (76.45), dated about 440 BC, gives a perspective of the size of a Molossian, placing the animal beside a dwarf and behind a man of normal height. 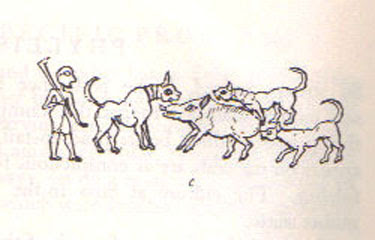 Additional Note. The massive study of Persian art edited by Arthur Upham Pope over 20 years, A Survey of Persian Art from Prehistoric Times to the Present (Manafzadeh Group, Teheran 1938-1958), contains an impression of a seal from before 3,000 BC, showing a boar hunt with dogs described as mastiffs (Figure 70c, reproduced here). The author of the chapter, Phyllis Ackerman, notes that earlier representations of hunts (mostly on pottery) showed lean and swift dogs, similar in appearance to greyhounds. She sees this as a shift in the preferred hunting dog, but it may also reflect the fact that earlier hunts usually involved deer-like animals, for which stouter dogs would have been less useful. This, of course, raises the question of whether Molossians, even if they began as sheep dogs, did not move into hunting even earlier than they moved into war. Combat with a large boar inevitably is a rather war-like business.

Thanks to Richard Hawkins of Fern Hill Scottish Deerhounds for recommending many useful sources on dogs in the ancient world. Thanks to Mark Stern for lending me his copy of Pope's great work.
Posted by John Ensminger at 5:42 PM