The Fish and Wildlife Service has determined, in final rules, that the gray wolves of Minnesota, Wisconsin, and Michigan no longer meet the definition of threatened and endangered under the Endangered Species Act. The gray wolf has been protected since 1974, though initially called the eastern timber wolf (Canis lupus lycaon). In 1978, the gray wolf species was listed as endangered throughout the lower 48 states and Mexico, except in Minnesota where it was classified as threatened.

In 2010, the Service received petitions from the Minnesota Department of Natural Resources and the Wisconsin Department of Natural Resources requesting delisting of wolves in the states. Additional petitions to this effect were received from Safari Club International and the National Rifle Association of America. The Service acknowledged that there were factors supporting these petitions. 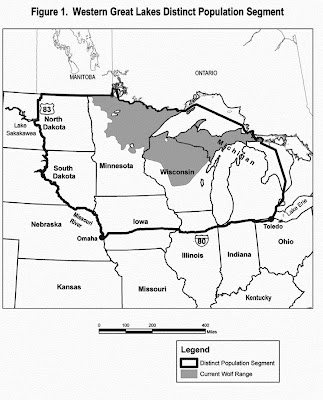 The delisting covers the Western Great Lakes Distinct Population Segment (DPS), shown in the map. (Double click on images to enlarge.) The final rules were published in the Federal Register on December 28, 2011 (71 Fed. Reg. 81666). The proposal to remove wolves in most of the eastern U.S. from coverage under the Endangered Species Act was described in a blog last May. The proposed delisting of wolves in Wyoming was discussed last October.

The Service’s December 2011 release describes the various scientific classifications that have been proposed regarding wolves in the western Great Lakes:

All of these possibilities have received support from various groups of scientists in the last ten years. Body and skull measurements were primarily used for classification in earlier studies, while DNA analysis dominates in more recent research. DNA research has supported various classification hypotheses. A particularly influential study was that of vonHoldt et al. (2011), which found that the Great Lakes wolf is a “highly admixed” variety derived from gray wolves, with some coyote hybridization. David Mech, a peer reviewer of the proposal, is quoted in the release regarding the current status of the argument that the wolves in the area are a separate species:

“Although it is true that at the writing of the proposed rule, it seemed like considerable evidence had accumulated supporting the existence of the separate species, Canis lycaon, or the eastern wolf, the vonHoldt et al. (2011) article published since adds enough doubt as to question that proposition. At the least, the vonHoldt et al. (2011) article evinces that there is not consensus by the pertinent scientific community about the existence of C. lycaon and therefore about the original range of C. lupus.”

Some of the research cited by the Service is not yet in print, including a manuscript by Service employees (Chambers et al.) which concludes that the eastern wolf is most probably not a subspecies but a full species, Canis lycaon. Despite acknowledging this possibility, the Service at present continues to recognize Canis lupus as the only species occurring in the western Great Lakes. Within this species determination, the Service notes that genetic research indicates the wolves of the area “are mostly of the same genetic makeup.” Wheeldon & White (2009); Fain et al. (2010). 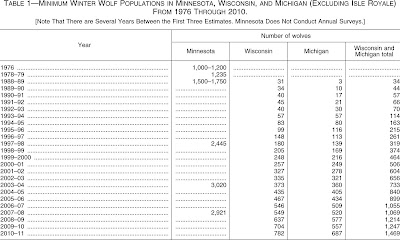 Probably anticipating opposition from conservation groups (which so far does not seem to be materializing), the Service makes a considerable effort to distinguish its actions from much less conservation-minded Canadian policies. The release notes that there are an estimated 4,000 wolves in Manitoba, which may be hunted nearly everywhere in the province from August 31 to March 31, and may be trapped about half the year. There are about 8,850 wolves in Ontario, with hunting and trapping permitted year-round in much of the province.

There is no doubt that wolf populations in Michigan, Minnesota, and Wisconsin have been increasing, or at least staying constant. The table shows minimum winter wolf populations of Minnesota, Wisconsin, and Michigan. The size of the population in Minnesota has remained most stable (though a census is not taken annually in the state), which the release explains as due to the fact that wolves “have successfully colonized most, perhaps all, suitable habitat in Minnesota.”

Wisconsin’s Bureau of Endangered Resources, within the Department of Natural Resources, issued a report in September 2011 describing the recovery of the state’s wolf populations, including the graph below. Wydeven et al. (2011).

Environments in Which Wolves Can Survive

The release describes the environments in which wolves now live as follows:

“A common misconception is that wolves inhabit only remote pristine forests or mountainous areas, where human developments and other activities have produced negligible change to the natural landscape. Their extirpation south of Canada and Alaska, except for the heavily forested portions of northeastern Minnesota, reinforced this popular belief. However, the primary reason wolves survived in those areas was not because of habitat conditions, but, rather, because remote areas were sufficiently free of the human persecution that elsewhere killed wolves faster than the species could reproduce [citing Mech (1995)].

“In the western Great Lakes region, wolves in the densely forested northeastern corner of Minnesota have expanded into the more agricultural portions of central and northwestern Minnesota, northern and central Wisconsin, and the entire UP [upper peninsula] of Michigan. Habitats currently being used by wolves span the broad range from the mixed hardwood-coniferous forest wilderness area of northern Minnesota, through sparsely settled but similar habitats in Michigan’s UP and northern Wisconsin, and into more intensively cultivated and livestock-producing portions of central and northwestern Minnesota and central Wisconsin.” 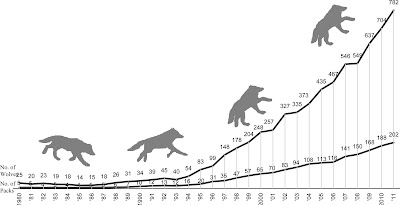 Road density has been shown to be “the best predictor of habitat suitability.” When road density is greater than 0.9 to 1.1 linear miles per square mile, wolves will not maintain breeding packs in the area. See Wydeven (2001). Other factors important for suitable habitat are human density, prey base, and size of the area. White-tailed deer density is important for wolves in the western Great Lakes. The Service concludes that for the foreseeable future, there should be adequate protection of suitable land, some of which is federal and state property and some of which is used commercial for logging.

One downside of increased wolf populations is that more livestock will be killed by wolves. In Michigan, wolves were only verified to have killed three animals in 1998, but this rose to 46 in 2010. Naturally, this will increase the number of legal and illegal kills of wolves. For a study of risk mapping of livestock depredation from gray wolves, see Treves et al. (2011).

When delisting was proposed in May 2011, the Fish and Wildlife Service requested comments, and received over 800, 24 of which were from nongovernmental organizations with various interests. Some scientists, including David Mech, agreed that delisting in some areas was supported by the data. Environmental groups were particularly concerned with delisting by reclassification, an issue discussed here in May.

Although the wolf populations of Michigan, Minnesota, and Wisconsin have significantly increased, in many areas reaching stable levels, it must be hoped that federal protection can be resumed in the event that state, tribal, and other authorities do not pick up or continue their responsibilities to protect wolves. Given anti-regulation biases at most government levels in the U.S. today, and a public that is increasingly intolerant of any regulation perceived as threatening ancient rights, including hunting and trapping rights, despite the massive environmental changes introduced by humans, the long range protection of the wolves may not be as solid as the Fish and Wildlife Service would have us believe. A different administration, or maybe even this one, may not allow the Service to get back into the wolf preservation business even if it becomes necessary. It must also be questioned whether the Service would have the stomach for the inevitable political fight, something not evident in its wolf rulings in recent years.

Thanks to L.E. Papet, Eric Krieger, and Yva Momatiuk for additional sources and thoughts.
Posted by John Ensminger at 1:37 PM