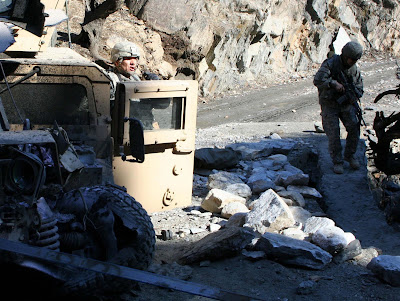 A car bomb detonates on a roadside and destroys half of an American tank as it passes by. Parts of the steering wheel from the car holding the bomb and alligator clips from the bomb itself are recovered by a forensics team within an hour. A scent transfer unit is used to extract scent from the surface of the steering wheel and from an alligator clip. Three hours after the explosion, two bomb dogs arrive. One is scented to the gauze pad made by the STU using the fragment of the steering wheel. The other is scented from a pad created by the STU from the alligator clip. The first dog trails towards a village half a mile from the explosion site and into a small house where three men are sitting. The dog alerts to one of the men. The second dog takes a somewhat different path into the village and goes into a government building where it leads its handler to an empty office.

What are the odds that a dog will follow the trail of the man who drove the car to the location of the explosion by being scented on the pad created from the steering wheel? What are the odds that the other dog would follow someone who participated in making the bomb? The answer to each question is, according to recent research, better than 90% (94.3% under specified experimental conditions). What are the odds that a dog will alert to someone who participated in the bombing? According to the same researchers, 82.2% (somewhat less where trailing does not begin at the blast site). These results were obtained in a study conducted near Phoenix, despite the fact that decoys, debris collectors, cameramen, and researchers were laying tracks over those of the driver and the bomb maker before the dogs began trailing.

The research assumes that highly trained identification dogs are available (this is not explosives detection work) and provides a very strong argument that experienced canine-human teams should be available for deployment to locations where car bombs and IEDs have been detonated.

Car Bomb Experiment. A peroxide-based car bomb with a 5 kg charge of liquid peroxide and liquid nitromethane, boosted by a two ounce piece of C4 with an electronic blasting cap was placed in the front passenger floorboard of a pickup truck, along with a nylon bag and simulated IED componentry, such as wires, duct tape, alligator clips, and a metal box. Post-blast debris was collected by three individuals who were present at the start of each trial for dismissal by the dog. The post-blast debris used for human scent sources was the steering wheel, driver’s side, door, and the nylong bag. Scent was collected with a scent transfer unit (STU-100), run at the highest setting for one minute. Gauze pads were placed in glass jars.

Prior to detonation, one human target (called “Terrorist” in the study) handled the nylon bag and IED componentry, while another (“Driver”) was seated inside the driver’s seat of the pickup, handling the steering wheel and column, the driver’s side mirror and the door. Both targets then walked from the vehicle into the village, about half a mile, and then did a Y split and separately entered buildings. These targets carried GPS units to document their paths from the blast site to the end of the trail. The experiment was conducted in southwest Arizona.

Six other people were in the experiment area as decoys while the Terrorist and Driver were running their trails. Three camera crew members were at stationary locations, and two researchers were present for documentation. The canine teams did not know the identities of the decoy, the two researchers, and the two targets. In order for a canine team to successfully complete the exercise, the dog would have to follow the trail of the target odor, ignore non-target humans in the experiment, and identify the specific target without prior knowledge of direction of travel or the identify of the specific target.

Thirteen canine-handler teams were involved in various parts of the study. The dogs had been trained in scent trailing, not tracking, and could thus work at some distance from the footsteps of the individuals trailed. Dogs were from one year to ten and a half years of age, with varying degrees of training and experience. Seven of the dogs had been certified by the Bloodhound Handlers Coalition.

IED Experiment. Improvised explosive devices can be powerful enough to damage even heavily armored vehicles (as shown in the Department of Defense photo above, an incident unconnected with the experiments described here.) The researchers created a roadside device from two 60 mm mortars, boosted with a two ounce piece of C4. The mortars were placed about 15 ft from the passenger side of a delivery truck in a hole dug by hand about 4 inches deep. A lunch pouch containing a walkie talkie, wires, and alligator clips was also placed in the hole to simulate IED componentry. Post-blast collection was conducted by 25 people walking a grid in all directions from the blast site. Here also the two individuals collecting scent were present at the start of each trial for dismissal by the dog. Debris used for scent sources were pieces of the woven handle of the insulated lunch pouch.

Prior to detonation, the lunch pouch and componentry were handled by two targets, one of whom, Target 3, walked a trail from the blast site into the village and into a structure in the village. Target 4 was taken to a stationery school bus, then walked to another structure. These targets were also equipped with GPS units. Two camera crew members were at stationery locations in the experiment area as were additional researchers present for documentation purposes. Again, the canine team had to follow the trail of a target, ignoring non-target humans, and identify the specific target without prior knowledge of direction of travel or the identity of the target.

Results of Car Bomb Experiment. The researchers noted that the scents of both human scent targets were probably commingled on post-blast items. Thus, it was not considered incorrect for a canine team scented on the “Terrorist bag” to identify the driver. All canine teams properly dismissed decoys and researchers as target human odors, though one dog displayed aggressive behavior towards a cameraman and the exercise was terminated. The dog had been following the correct trail, however. In sum, 12 of 12 dogs followed the correct odor trail, but only eight of 12 made a correct identification at the end of the trail. Thus, 100% of teams followed the correct trail, but 72.7% made the correct identification.

Results of IED Experiment. In the first part of this experiment, both human scent targets handled the same IED componentry. Some dogs followed the trail of Target 3 and identified him, but other teams, because of a change in the wind, followed the odor trail of Target 3 but picked up the odor of Target 4 at a turn in the trail and identified Target 4. Both identifications were considered correct. No false identifications were made of the decoy and two researchers near the building containing Target 3, but one team did not follow the correct human odor trail away from the blast site. Thus, 91.7% of teams followed the correct trail and the same percent correctly identified the target.

In the second part of the IED experiment, ten of 11 teams correctly trailed to the area where Target 4 was located but only five of these teams correctly identified Target 4, while one team identified Target 3 (still correct because of joint handling of componentry). Two teams falsely identified decoys, which only happened in this part of the experiment. Thus, the teams were 91% correct on trailing but only 54.5% correct as to identification.

Perhaps some speculation concerning the evidentiary significance of this research is appropriate. Of course, the courtroom value of the evidence might be affected by whether it would be introduced in a military court. Quite likely, in a theater of war, this approach would be used to arrest suspects, but not to conduct full trials without additional evidence. The fact that there were 25 correct identifications and only two false identifications suggests a diagnostic ratio, for forensic purposes, of 12.5. This puts the evidence into a significant category and into the range of human visual lineups. The scent from the steering wheel, however, might be of limited value since scents on the wheel could be from anyone who drove the car, not just the driver who put it near the road where it exploded. Although the dogs might begin trailing at the location of the explosion, in a relatively contained environment such as a rural village, an argument could be made that other drivers might have walked near the location.

Additional Note. An article set to appear in the Journal of Forensic Sciences in 2012, by Shate G. Hoffman, Shawn E. Stallworth, and David R. Foran, Investigative Studies into the Recovery of DNA from Improvised Explosive Device Containers (2011: DOI: 10.1111/j.1556-4029.2011.01982.x), concludes that "recovering DNA from IED containers is a viable approach for aiding in the identification of those who may have been involved in an IED event."
Posted by John Ensminger at 6:31 PM