In Conflicts Between Packs of Feral Dogs, Generals Know Who Will Watch Their Backs 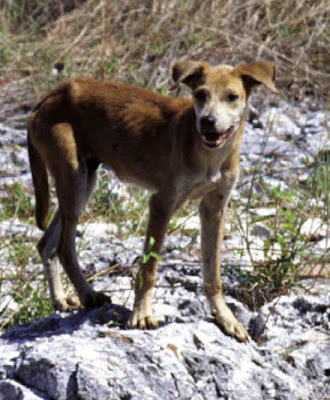 Some of the most interesting work on the social behavior of feral dogs has been done in Italy. (See particularly the many interesting papers of Luigi Boitani on feral dogs in the Apennines. The picture shows such a dog.) Continuing this focus of Italian research is a recent paper by two scientists from Parma and one from Rome, looking at the participation of members of a feral pack in conflicts with another pack.

In any conflict between groups of animals, some animals will cooperate in the attack or defense, but others will shirk the responsibility. Anyone who has seen a war movie knows this, and it is true of dogs as well. With dogs, like humans at war, the entire pack may benefit from the actions of a relatively small number of aggressive individuals. Cooperation is important for a group, particularly for a smaller group in conflict with a larger group, and the shirking of responsibilities by eligible participants—called “cheating” in the recent research—can have negative consequences for the group.

Groups of feral dogs have a complex social organization with a dominance hierarchy. The researchers noted that conflicts are more likely to be instituted by a group if the opponent has a lower ratio of potential fighters to companions (noncombatants). The research was done in a suburban area, traditionally called Muratella, on the southwestern outskirts of Rome. The area included a nature preserve, Tenuta dei Massimi, with grasslands and wooded areas. Dogs used this area to find resting sites and establish dens for puppies. Food, generally meat from a slaughterhouse, was brought to a central road by volunteer dog caretakers in the early morning.

There were about 100 adult dogs in the area, generally not socialized to humans though dependent on them for food. Dogs were periodically trapped, sterilized, and then returned to the area by civic authorities, but there were still many intact animals during the period of the study, which began in May 2007. There were 11 packs in the area, three of which the researchers focused on and named Corridoio, Curva, and Piazza. The individuals in the groups were sexed by genital morphology, but when this was not apparent, by how high they raised their hindlegs in urinating. Corridoio had 11 individuals, Curva 10, and Piazza four. In November 2007, Curva pack absorbed another pack of six dogs, making it the largest group.

Dogs were watched in daylight hours through binoculars. Two groups within a few hundred meters of each other meant an intergroup conflict might occur. Interindividual distance tended to decrease between a group’s members as they got closer to another group (closing ranks as it were). A pack member was considered to be actively participating in an intergroup conflict if it moved forward at least 10 meters and lunged at opponents when the two packs were less than 20 meters apart. Most interactions did not actually involve aggressive physical contact—jumping on, scratching, biting—but rather threatening displays with furious barking and snarling, staring, and with raised tails.

An individual was regarded as defecting if it was within 50 meters of companions at the time a conflict was initiated but did not approach opponents aggressively. Individuals who approached opponents after the conflict without showing signs of aggressiveness were also scored as defecting. A “leader” in a conflict was defined as the dog that came closest to opponents, by at least half a body length over other companions, or as the only dog to have physical contact with opponents. A leader was not discernible in about half the interactions.

Packs responded to a threat in four possible ways: (1) retreat, (2) counterattack, (3) bark defensively without approach, or (4) display no response. A pack was regarded as having lost if it retreated or obtained no access to food when the contested resource was food. The researchers spent 1,147 hours in the field in 2007 and 2008 and observed 392 intergroup conflicts.

The researchers found that specific dogs were more likely to participate in conflicts the more “affiliative partners”—something close to friends—they had in the group. Close kinship was often involved in such relationships, as has also been observed in wolves. Thus, dogs that know they have friends to back them up are more likely to enter conflicts with other groups. A major finding of the study was that the proportion of cooperating animals within a pack tended to decrease with an increasing number of pack members present. Thus, cooperation tends to decrease as winning appears more likely. Some dogs may realize that their contribution will not be necessary and prefer to avoid the risks involved. Bonanni, R., Valsecchi, P., and Natoli, E. (2010). Pattern of Individual Participation and Cheating in Conflicts Between Groups of Free-Ranging Dogs. Animal Behaviour 79: 957-968.

2011 Paper. Bonanni and fellow researchers published a paper in the January 2011 issue of Animal Cognition describing the ability of packs of dogs to assess the size of an opposing group relative to the size of their own group. The authors state:

"The overall probability of at least one pack member approaching opponents aggressively increased with a decreasing ratio of the number of rivals to that of companions. Moreover, the probability that more than half of the pack members withdrew from a conflict increased when this ratio increased. The skill of dogs in correctly assessing relative group size appeared to improve with increasing the asymmetry in size when at least one pack comprised more than four individuals, and appeared affected to a lesser extent by group size asymmetries when dogs had to compare only small numbers. These results provide the first indications that a representation of quantity based on noisy mental magnitudes may be involved in the assessment of opponents in intergroup conflicts and leave open the possibility that an additional, more precise mechanism may operate with small numbers."