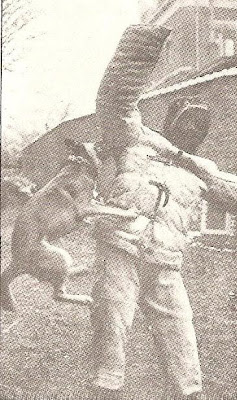 There could be said to be two strands in the origin of police dogs in the United States. Primarily in southern states, dogs were used for tracking escaped convicts and criminals after the Civil War, reaching judicial attention by the 1890s. These dogs, mostly bloodhounds, bayed at a suspects if they found them at the end of the trail, generally without biting. Bloodhounds were not then owned by the police departments, but rather were the property of private individuals, sometimes of prison authorities, and were borrowed for police work as cases required.

Police dog units existed in Europe by the end of the 19th century, beginning in the Belgian city of Ghent. A report in the New York Times, "The Police Dogs of Ghent, How They Are Trained to the Duties of Town Constables," says that there were 16 dogs by 1902, mostly Belgian shepherds. The dogs accompanied police on night shifts and were kenneled during the day. The Times article describes a four-month training program in which dogs were taught to seek, attack, seize, and hold "but without hurting seriously." Dogs were first trained to attack dummies put in positions of men trying to conceal themselves. After the dummy, a person was used, initially the dog's trainer so that it could be called off easily. The dog was muzzled at first to avoid serious injury. Bite suits, which began as thick clothing, soon became specialized training gear, as indicated in the photo dated 1911. The Times article reports that the dogs at the Ghent school were also taught to scale walls and even to jump into water to save people from drowning.

In his book, War, Police and Watch Dogs, published in 1910, Edwin H. Richardson includes a letter from Mayor van Wesenmael of Ghent requesting permission (from an unnamed authority) to obtain funds for police dogs. The mayor argued that the dogs would be particularly useful at night in patrolling "the outer zone and wood quarters." He noted that increasing the number of police for such patrols would be much more expensive than obtaining dogs, then states: 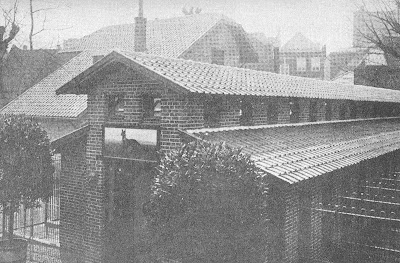 "I am not certain that a night policeman, who is acting in the suburbs, far from any help whatever, dare intervene when he sees a crime committed by several criminals. He cannot go as far and as fast as criminals, after being on duty for several hours. The criminal who has been meditating a crime dresses himself in a manner to be working as lightly as possible in case of flight. A dog works a long time on duty cheerfully, and he is able to follow a fugitive much more rapidly than a man. The dog is equipped with qualities of scent and hearing and can easily get into any place and examine it without his presence being suspected, and thus surprise the criminal, when the policeman in searching would probably be heard. If the burglar, thanks to his agility, succeeds n jumping over an obstacle or swimming away, a dog can stop him; the policeman would be hampered because of his heavy uniform, and perhaps he could not swim."

The mayor requested funds for ten dogs, but only expected to put three into service in the first year. Richardson visited police dog programs in Belgium, France, and Germany in 1909 and found that, while tracking dogs were being used in Germany, police dogs in Belgium and France were at the time largely used in patrol work. The picture of the police dog kennel at Ghent is taken from Richardson's book. The last picture, also from Richardson, shows a Ghent police handler with a dog fitted with a raincoat.

A 1907 report of the U.S. Consul General in Antwerp, H.W. Diederich, says that by that year the police in Antwerp had seven dogs used to patrol a dangerous section of the city around the docks and basins. Also in 1907, the police departments of New York City and South Orange, New Jersey, began assigning dogs to policemen. These dogs were primarily used to protect officers on patrol and to apprehend suspects, mostly by what would now be called a “bite and hold” method. The New York City police dog program was in part based on the Ghent program. A Lieutenant Wakefield of the NYPD visited Ghent to study the city's experience and returned to New York with two dogs purchased from the Ghent police force. By 1910, German trainers knew of the American use of dogs to track slaves over long distances, but in training often used trails of 300 meters or less. 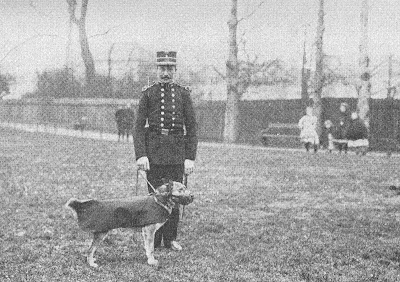 Addendum. The comment below is correct. An article from the New York Times of January 19, 1908, The Five Canine Candidates for Police Honors, Who Have Been Absorbing Wisdom in a Select School, are Ready for Business and Promise to Make Things Lively for Criminals, describes Wakefield's travel to Ghent and his efforts to bring back dogs. The article can be retrieved by searching the New York Times archives. The commenter may have additional information but comments to the blog do not come in with email addresses. I can be reached directly at jensminger@msn.com.

Thanks to Axel Van der Borght for several sources used here, and to Jeff Meyer for connecting me with Mr. Van der Borght.
Posted by John Ensminger at 10:17 AM