Guide Dogs in the Dance of Death 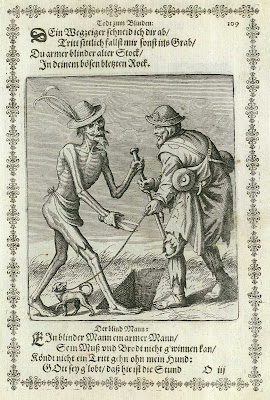 The Dance of Death (Danse Macabre, Totentanz) was an allegory in poems and paintings from the late middle ages into the Renaissance. One figure included in the illustrations and the poems was that of the blind man, sometimes depicted with a dog. The woodcut here is from the 1649 edition of Matthaus Merian’s Todten Tantz. The lines above the illustration are the words of Death, “I cut you off from your guide.” The blind man responds below, in the third line saying, “I cannot take a step without my dog (hund).”

It is difficult to draw sociology from allegorical illustrations, but it seems likely that these artists had seen blind men with dogs, and believed they could not move about without the animals. Death, after all, is severing their connection to the dogs in ending their lives. The blind men did not use halters on the dogs, but rather used staffs for support, connecting to the small dogs with leashes. Small dogs would have had the advantage of needing little food. The dogs did not stay by their masters’ sides but rather pulled them forward, as is shown in the Pompeii fresco and the Chinese scroll discussed in prior blogs (July 19 and September 14, 2010).

The size of the dog in the woodcut is probably reduced given that the purpose is to show what will happen to the man, not the dog. The dog’s posture is similar to that in the Pompeii fresco, with the dog looking back at the master as if awaiting a gesture or verbal encouragement. Amedeo Maiuri, once curator of the Pompeii Museum, described the man with the dog in the Pompeii fresco as a beggar. The poverty of the blind man in the woodcut is emphasized by his carrying what probably amounts to all of his possessions on his back. Of course it is extremely unlikely that a visual typology in the depiction of blind men would extend from the silver age of Rome to the early Renaissance. The similarity comes from the poverty that is almost inevitable with blindness in both periods, and the fact that dogs would be valued by the blind for their ability to provide some degree of sight.

It seems that blind men with dogs were common enough in the seventeenth century that their deaths could be depicted as inevitable if their ability to use their dogs came to an end.

Montaigne (1533-1592) made some relevant observations about dogs and blind men in his Apology for Raymond Sebond:

"Everyone is tired, I believe, of seeing how many kinds of tricks trainers teach their dogs [les batteleurs apprennent à leurs chiens]: the dances where they never miss a single cadence of the sound they hear, the various different movements and leaps that they are made to perform at their masters’ word. But I notice with more astonishment the action of the dogs used by the blind in country and city [chiens dequoy se servent les aveugles, et aux champs et aux villes], something nevertheless common enough. I have noticed how they stop at certain doors where they are accustomed to receiving alms [ils s'arrestent à certaines portes, d'où ils ont accoustumé de tirer l'aumosne], how they avoid the impact of coaches and carts, even when for their part they have enough room to pass. I have seen one of them, along a city ditch, leaving a flat, even path and taking a more inconvenient one in order to keep his master away from the ditch [pour esloigner son maistre du fosse]. How could anyone have made that dog understand that it was its task to consider only the safety of its master and to neglect its own comfort in order to serve him? And how did it know that a certain road would be quite broad enough for it, but would not be so for a blind man? Can all this be understood without ratiocination and without thought? [Tout cela se peut-il comprendre sans ratiocination?]" (Translation of Roger Ariew and Marjorie Grene, p. 26 (2003))

As Montaigne observes, however, the dog is going to places where its master is accustomed to receive alms, so the path is probably known to it, along with those aspects that are treacherous to both. Consequently, some of the dog's behavior may be explained as learned from repetitive experience of the route itself.

Perhaps dogs helping blind people were more common in urban centers of northern Europe than has often been recognized.
Posted by John Ensminger at 6:23 PM