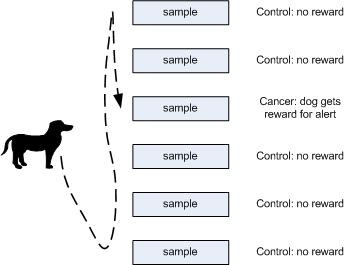 Dogs have been trained to detect bladder, lung, and breast cancers (see blogs of July 9, 2009, and July 11, 2010). Now a study published in European Urology adds prostate cancer to the list.

Prostate-specific antigen (PSA) blood testing remains the most widely used tool for detecting prostate cancer, which strikes about 200,000 men per year in the U.S. Research continues to look for volatile organic compounds in urine as alternative biomarkers. A team at the Tenon Hospital in Paris, France, trained a Belgian Malinois owned by the French Army that, prior to being trained to sniff urine, was destined for explosives detection training.

The dog was trained to discriminate between urine from individuals with prostate cancer and urine from controls. A clicker method was used, with a ball as a reward for alerting to a cancer urine. The dog’s alert was to sit before a target odor. Passive alerts are preferred for explosives detection work and the trainer taught such an alert here. The dog trained and worked in the experiments for almost three years, from October 2007 to June 2010. The training phase alone was 16 months and involved repeated exercises in which the dog chose between one cancer sample and one control sample.

Urine samples were obtained from 108 male Caucasian patients, all of whom underwent biopsies, but only 66 samples were used in the double-blind phase of the experiment. The figure shows the sort of six-station scent lineup that was used in the double-blind phase. The handler did not know the location of the cancer sample until after the dog had alerted. Of the 66 samples in that phase, 33 were cancerous, and 33 were controls. In 33 runs, the dog sat in front of the cancer sample, but in three the dog sat before a control. Although these were classified as false positives, the three urine providers underwent new testing and one was found to have prostate cancer. The researchers also noted that some patients with negative biopsies may nevertheless have prostate cancer, meaning that the other two false alerts might also not have been truly false.

The researchers acknowledged that this was a costly and long study and that it is “difficult to conceive of an extended use of this test in clinical practice.” Mary Elizabeth Thurston noted 15 years ago that cancer sniffers might be used in poor countries, but until dogs can be available to doctors without borders, this may remain a fantasy.

This French study was brought to my attention by Dr. John Wong, CEO of Moraga Biotech. John, a former roommate of mine at Berkeley and among the most brilliant people I've ever known, is doing some of the most interesting biotechnology research in the world and came across the paper in his daily scouring of international research developments.
Posted by John Ensminger at 2:51 PM