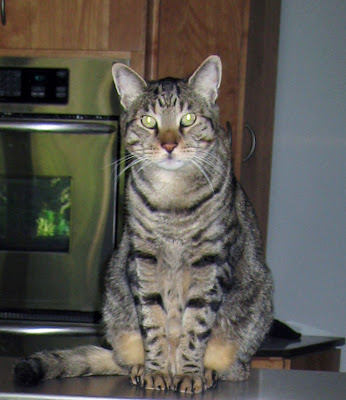 Perhaps there is nothing more profound that our pets do for us than teach us how to die.

Joan and I got Jack from the East 92nd Street ASPCA shelter in March of 1996. We were both in corporate jobs in Manhattan and though we wanted a dog, it was out of the question with our schedules. Also our building in Brooklyn Heights had a no-pet rule, but grudgingly accepted cats. Jack was our second cat at the time, and Arthur, the cat my wife had when I met her, did not take kindly to Jack. We had to separate them for almost a month for fear that Arthur would kill the young kitten. Arthur eventually accepted Jack, but only on his own terms. Jack had to remain second. The servant. The one who licked Arthur, while Arthur never licked Jack. But Arthur was old and died after three years. Jack came into his own.

Everyone loved Jack. He was a calm cat. He had no buttons pushing which would get you scratched or bitten, at least when he was young.

Joan and I, and Jack, made great friends on 9/11 when Jack was five. I was working at home that day and Joan was at her job at a bank headquarters a block from the World Trade Center. She began walking back to Brooklyn across the bridge after the first tower came down. That was lucky because all the windows on the south side of her building were blown inward when the second tower fell. Soon after she got home, our neighbors, Chris and Rod knocked on the door.

“We don’t want to spend this day alone. Can we join you?” they asked.

They lived on the same floor in a building on Monroe Place, Brooklyn Heights. We knew them for elevator rides, for occasional conversations on the roof deck, but only in the formality of dwellers of the same building. 9/11 made us friends and they spent many hours in our living room that day, occasionally looking west where two towers had loomed above the building across the street only hours before. Jack was there and made friends with Chris and Rod as well. Whenever they entered our various homes after that, Jack always wanted to sit as an equal, as if part of the conversation. There had to be a place for him at the same level. On a chair or a couch. The five of us visiting. It never happened with anyone else.

Then in 2006 I got Chloe and Jack’s life took a turn for the worse, the mirror image of Arthur’s reaction to Jack. Now it was Jack that hated and despised the newcomer. And I favored Chloe. I began to train her, at first just because I wanted to have an obedient dog, but soon because I wanted her to be a therapy dog. He never got as much attention after Chloe came into our lives though Joan was more balanced in her affections. Jack began to age, became grumpy, sometimes hostile. Guilt bothered me, but I had a right to have a dog, I told myself. I had grown up with dogs. I was more of a dog person than a cat person. Even though James Thurber exaggerated the gap between the two types of pet owners, there is something to it.

Our two pets achieved a separate peace. Jack was the dominant one. Chloe, four times his size, accepted Jack’s rule. We decided not to interfere, at least not too often. They had to work it out.

About a year ago we noticed that Jack was thinner. Vets in New York and Arizona tested for hypothyroidism and diabetes, the mostly likely suspects, but the results came back negative or inconclusive. Perhaps we were overreacting to the weight change? Everything else seemed reasonably healthy, he was eating well, and pretty active for cat approaching 15 years.

But he continued to lose weight and his habits began to change. We always put his food on the kitchen counter so that the dog couldn’t get to it. Twice a day. In the evening he would sit on the kitchen table and howl for additional food from anyone who passed. One of us would usually pay the toll, particularly after the weight loss began. That declined and then stopped. I looked at him one evening and knew that he had lost even more weight in just two days. “I think he’s dying,” I said to Joan.

We went to the vet the next morning. When we put him on the examination table, I saw that his right eye had a reddish brown color. It had not been there the day before. The vet was troubled by the eye as well. He had lost two pounds since his previous visit five weeks earlier.

“There are a number of things that could explain the symptoms, but lymphosarcoma would be up there, and feline perotinitis. Most of the possibilities are not good. Do you want blood tests?”

We did. When the vet tech brought Jack back in the room and put him on the table, Jack looked at me. Stared at me. Wouldn’t take his eyes off me. One now clearly red. One normal and green but with some puss coming out. Staring at me. Staring into my heart. Not angry, I don’t think. Perhaps sad. Afraid. Trying to reach across the barrier of species and tell me something, that he was was breaking apart, that he wanted help, but he could see from my eyes that I was powerless against what was happening to him. We were all powerless. He knew, I think, that his body was coming to an end.

“I will call you tomorrow with the results,” the vet said. Then he added something. “Brace yourselves. It seems he’s starting to shut down. It may not be long.”

We drove home. In the back of my mind I was thinking that we might have to delay our drive east in early April. We could not cross the country with a dying cat. I was thinking months, weeks at least, not days or hours. So was my wife, though neither of us expressed this aloud.

After lunch the same day I lay down on the bed to rest my eyes and put Jack beside me. He remained there for a minute, then got up, jumped off and went into the closet. Not a usual place for him, but dark, private. He began to howl. I brought him back to the bed. He went back to the closet.

He moved from place to place, moaning. Joan and I began to follow him. I was now thinking days. Then I picked him up and put him on the bed again. His legs did not support him. He fell on his side. But he managed to get up and move to the floor and then to the glass door. He wanted to look outside towards the White Tank Mountains. Soon he could not walk. He would try, but only get his front legs up. Enough to look out the window. His eyes moved from me to Joan, to the mountains, then back to us, back to the mountains, those he was leaving, where he wanted to fly. Or was he just saying goodbye to the earth he had so briefly walked upon, drinking deep the last draughts of life?

I called the vet’s office just before it would close at 5. The doctor came on the phone. I explained what was happening. Should I bring him in? He was dying, the vet said. “I can tell you what may happen in the next hours.” There was no point in bringing him to the office unless we wanted Jack euthanized.

“I think he’d rather die at home.”

“He probably would,” the vet agreed.

I will always be grateful to him for not adding to the guilt. More than I could express to him or put in words here.

Jack stopped purring. We remained with him. He became comatose. His breathing became occasional gasping.

“We might not know when he goes,” Joan said.

The gasping became less frequent. It would stop so long that we would look at each other. Was he gone? Then he would gasp again. His feet were cold. His nose was cold. Everything was cold.

Finally I picked him up. Limp like a rag. Suddenly weighing nothing at all.

We called Chris and Rod, then Ruth, his favorite cat-sitter in recent years. A small but wonderful part of the world had left it, and left us.