Black Lab Detects 12 Types of Cancer: An Odor Signature Common to All Cancers? 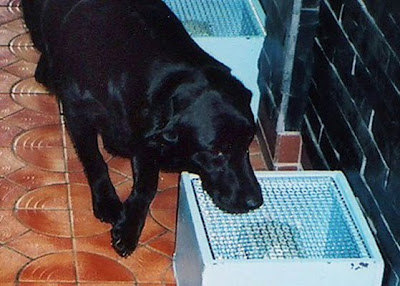 Twelve researchers at various institutions in Japan have described what may be one of the most promising uses of dogs for cancer screening, finding that dogs are particularly accurate for colorectal cancers, even for cancers in early stages. They speculate, however, that there may be a “specific cancer scent” that allows dogs to recognize a wide range of cancers.

Only one dog was used in the study, a female black Labrador retriever named Marine, obtained from the St. Sugar Cancer Sniffing Dog Training Center in Chiba Prefecture, Japan. The dog was trained for water rescue beginning in 2003, and for cancer detection beginning in 2005 in trials in which she was taught to recognize breath samples from esophageal cancer patients against four controls. The correct behavior was rewarded by play with a tennis ball. Training also involved patients with lung and gastric cancers. By the time the colorectal study began, the dog was able to identify breath samples of patients with a long list of cancers: esophageal, breast, lung, gastric, pancreatic, hepatocellular carcinoma, cholangiocarcinoma, colorectal, prostate, uterine, ovarian, and bladder.

The dog had a passive alert, sitting down in front of a sample station. A true positive was an indication to a cancer sample. A true negative was sniffing but not indicating to a control sample. Incorrect responses were indicating on a control sample (false positive), or sniffing but not indicating on a cancer sample. The dog indicated to both the breath sample and the watery stool sample of one control. A hesitation was considered to be an incomplete reaction and was also recorded as an incorrect response.

Breath samples were obtained from subjects, as were watery stool samples during colonoscopies. Some subjects had no history of cancer, while some had a previous cancer history. About half the controls had colorectal polyps and a few had bleeding or inflammatory colorectal disease, including ischaemic colitis, nonpeculiar colitis or ulcer, ulcerative colitis, diverticular bleeding, mesenteric panniculitis, and chronic appendicitis. The presence of blood in watery stool samples of individuals without cancer was found, however, not to confuse the dog. Nor were current smoking, benign colorectal polyps, inflammations, or infections.

Of 36 colorectal cancer patients where the trials involved breath samples, the dog indicated in 33 cases, 91% of the time. Two of the three incorrect responses were hesitations. Of 38 colorectal patients where the trials involved watery stool samples, the dog indicated correctly in 37 cases, 97% of the time.

The researchers do not argue that dogs can be used clinically, but do suggest that an effort should be made to find out what they are smelling:

“It may be difficult to introduce canine scent judgment into clinical practice owing to the expense and time required for the dog trainer and for dog education. Scent ability and concentration vary between different dogs and also within the same dog on different days. Moreover, each dog can only conduct tests for a maximum of 10 years. It is therefore necessary to identify the cancer-specific VOCs [volatile organic compounds] detected by dogs and to develop an early cancer detection sensor that can be substituted for canine scent judgment.”

Dogs have been trained to detect a large number of odors, in some cases dozens, but the researchers here speculated that either a specific cancer scent exists or a particular natural scent disappears in patients with cancer. The paper favored the idea of a specific cancer scent, meaning that a dog trained to recognize one cancer may be able to detect other cancers, at least in breath or stool samples. A summary of canine cancer sniffing research (see blog of July 11, 2010) found that dogs are better at some cancers than others, but sources of scent varied in the studies reviewed, as did research methods. A 2004 study of canine detection of bladder cancer by Willis et al. reported an instance where the dogs in the study all indicated to a control. Further testing of the control individual resulted in the discovery of a transitional cell carcinoma of the right kidney.

Further research is needed to see how effectively dogs recognize cancers they have not been trained to detect.

An article in the Mail & Guardian online reports that Marine is being cloned by a biotech company in South Korea.

My thanks to Gene Papet for bringing this research to my attention.
Posted by John Ensminger at 8:19 PM