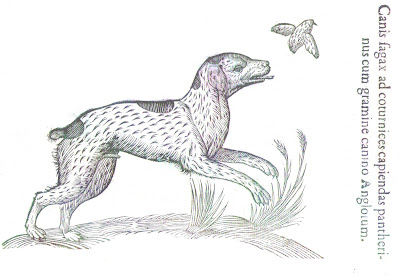 In 2005, my wife and I were in Germany where we saw Doberman pinschers with floppy ears and long tails, cropping and docking having gone out of practice in the country. At first the dogs looked wrong to me, but after a few days I got used to it and within a week began to prefer this appearance. Aesthetic expectations about dogs can be overcome, but it made me wonder why such expectations arise at all.
Docking and cropping as terms applied to dogs can only be verified well after the practice began. The Oxford English Dictionary cites references to docking horses' tails from 1419 and 1530, but the earliest mention of docking a dog's tail comes from Boswell's Life of Johnson. Cropping the ears of animals is described as a form of branding for identification in the OED's entry for the verb. Expeditation--mutilation of the dogs to prevent their bothering the king's deer--can be verified as occurring hundreds of years earlier (see blog of January 8, 2011).
The origins of docking and cropping of English hunting dogs apparently lie in perceived practicalities. Rawdon Briggs Lee, in his 1893 book on sporting breeds of England and Ireland, cites a foxhound authority that rounding of the ears of the foxhound, taking an inch and a half off the end of the ear, was begun to prevent “canker either from foul blood or mechanical injury.” Lee also states that the spaniel’s tail is docked “because the spaniel in working covert is less likely to injure his tail by lashing it backwards and forwards and tearing it amongst the tangled briers and thick undergrowth.”