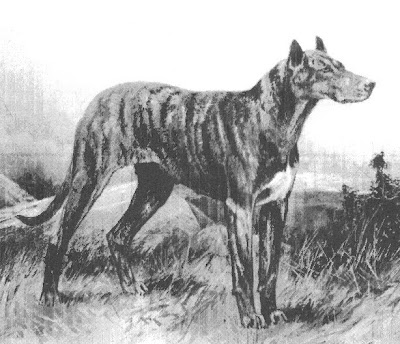 The Great Dane Club of America provides an official standard for the breed, which under the heading of Temperament states that the dog “must be spirited, courageous, always friendly and dependable, and never timid or aggressive.” Writing in 1893, just six years before the Great Dane Club of America was created, Rawdon Briggs Lee portrays the Great Dane as the pit bull of its time, observing that the dog “always had a temper and disposition of his own, which could not be controlled when he became excited.” Problems arose when London passed muzzling laws, since “muzzling amazed him, and made him savage, the restraint of chain or lead was not to be borne.” When a rabies scare drastically reduced the presence of the breed in parts of England, Lee generally saw this as a good thing since a Great Dane, “when not under control, was fond of fighting, and his immense strength and power gave him a great advantage over any other dog.”

The drawing here is taken from Lee’s History & Description of the Modern Dogs of Great Britain & Ireland (Sporting Division), showing a face entirely lacking in the Scooby Doo innocent curiosity and kindliness Americans now associate with the breed. Lee's Great Dane has cunning and determination, with no sympathy at all for the object in his sight.

I would like to think that pit bulls could go through a similar transformation in public perception. Unfortunately, a great many people seem to have a vested interest in retaining the image of ferocity for the American Staffordshire Terrier and the American Pit Bull Terrier. There are neighborhoods not far from where I spend winters in Phoenix where pit bull owners mix gunpowder with dog food out of some ridiculous belief that it will make the dogs fight better. It is poisoning them instead. I googled “gunpowder & pit bulls” and found that though most of the hits discouraged the idea, a few idiots provide recipes, sometimes adding steroids, WD-40, and ground glass to concoctions that will guarantee bloody victory in some abandoned barn in the desert south of Phoenix.

Perhaps in every generation some breeds must be saints, some demons. But these are our myths, not theirs.
Posted by John Ensminger at 4:46 PM