Once Majestic Companions to Kings and Queens, Greyhounds Spend Their Lives in an Institutionalized Hell in Seven States 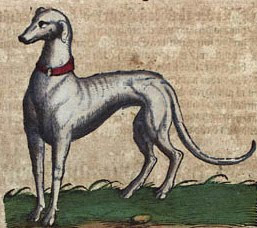 This week there was international outrage on the news that as many as 100 sled dogs had been slaughtered after they were no longer needed for entertainment at the 2010 Winter Olympics in Vancouver. The New York Times reported that the killing of the dogs was not itself illegal, but the fact that there was undue suffering might result in a prosecution under cruelty statutes. This should be prosecuted, but the U.S. cannot point fingers at Canada. Greyhounds have long been exterminated at the end of their racing lives, and it continues to happen in seven states.

The Oxford English Dictionary traces the word greyhound to Old English, citing usage as early as 1000 AD, with parallels to Norse and Teutonic words. George Jesse, in his history of the British dog, argues that the earliest form was most likely grehund, meaning great or noble hound. Jesse rejects the argument that the prefix gre- might imply a Grecian origin. The OED cites Edward Topsell (The historie of foure-footed beastes) who called the Gray-hound a Grecian Dog in 1607, but also quotes William Blane (Cynegetica, or essays on sporting) who concluded that ancient Greek writers on hunting did not know the dog. Jesse describes the greyhound as “beautifully majestic, gentle, graceful, surpassingly swift, and courageous,” and “the most superb of the canine race.”

Greyhounds received better care than other dogs at the time. In the reign of Edward II (1284-1327), the king’s huntsmen received one penny per day for each greyhound, but only a half-penny for other dogs. Greyhounds were not exclusively the dogs of nobles and kings. Chaucer (c. 1343 – 1400) says of his Monk that “Greihoundes he hadde as swift as foul of flight”—as fast as birds. Canterbury Tales, Prologue. Shakespeare knew them “swift as breathed Stags, ay, faster than the Roe.” Taming of the Shrew, Introduction.

Henry VIII (1491-1547) got tired of those he allowed at court bringing greyhounds and other dogs with them and forbade it “except it be by the King’s or Queen’s commandement. But the said greyhounds and dogs to be kept in kennel and other meete places out of court as is convenient.” Anne Boleyn may not have agreed with her husband’s banning of the dogs. She gave the Cardinal du Bellai “a complete hunting suit, including a hat, bow arrow, and a greyhound.” Jesse writes that the queen herself shot and hunted, but despite his love of dogs, Jesse acknowledges the ban on dogs at court was probably an “advancement of refinement.” The makers of The Tudors should have had more dogs in the early court scenes.

The first plate above is from the Thierbuch of Konrad Gessner (1516-1565). Aldrovanus also included drawings of several types of greyhounds in his natural history, using Latin terms, Canis venaticus (large game hunting dog) and Canis leporarius (hare dog, to be distinguished from Canis luporarios, wolf dog). 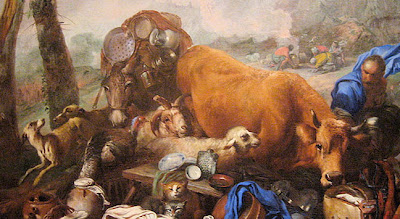 The nobility of the greyhound was not restricted to England and is reflected in Giovanni Benedetto Castiglione’s painting, Noah’s Sacrifice after the Deluge, now in the Los Angeles County Museum of Art. The painting dates from about 1650 and shows two greyhounds running while Noah prepares his offering of a calf. The lead dog, the male, looks back at the female whose body is partially obstructed by a pack horse. Noah, being a noble of his time, would have chosen the noblest breed of dog to preserve on the most famous cruise ever taken.

Greyhound racing in the United States has led to abuses so horrible I am ashamed to belong to the species that inflicts them. Greyhound litters are culled to eliminate dogs that show little promise of winning at the track. Addie Patricia Asay, in a heart-wrenching article published in the Stetson Law Review in 2003, noticed discrepancies between litter size and registration numbers and estimated that at that time upwards of 10,000 puppies were killed each year to cull the litters of dogs whose legs are too short or who don’t take to running quickly. Around 20,000 dogs were killed in 1999 after their careers were over and no one wanted them. The greyhound adoption movement has brought this figure down, as has the decline in states that permit dog racing, but the number of dogs killed at the end of their racing lives probably remains above 3,000. An official of Grey2K USA advises me that the racing industry is only quasi-public and many tracks do not release any figures on the number of dogs that are now being put down. Owners of racing dogs sometimes avoid killing them by donating them for medical experimentation.

Perhaps the largest single abuse involved a racetrack security guard in Alabama, who was investigated in 2002 for killing more than 3,000 greyhounds over several years. Autopsies showed that many were not shot in the head, but in the neck and other areas where they would have suffered before they died.

Grey2K USA brought to my attention Arizona House Bill 2536. If enacted, this Bill would not ban dog racing in Arizona, but would allow Tucson Greyhound Park to end live racing and show races on screens from other states. There is an active initiative to ban dog racing in Iowa.

Thanks to Beesnest McCLain for permission to reprint the photograph of Il Grechetto's Noah's Sacrifice after the Deluge.

Supplemental Note. An effort has begun to amend British Columbia anti-cruelty laws to deal with situations such as the slaughter of the sled dogs.
Posted by John Ensminger at 6:10 AM