Small Dogs Appeared Early in the History of Canine Domestication, but Did This Happen in the Middle East?

Research published in 2007 indicated that small dogs share a variant of the IGF1 gene on dog chromosome 15. Variants in the IGF1 (insulin-like growth factor 1) gene are “fixed in the majority of small distantly related dog breeds which suggests that small size evolved early in the history of domestication.” A few giant breeds (mastiffs, bullmastiffs, and rottweilers) share the “small” allele, but no wild canid so far tested has been found to have this variant.

Surveying a great many grey wolves and dogs, members of the same research team (Melissa Gray, Nathan Sutter, Elaine Ostrander, and Robert Wayne) have concluded in research published in 2010 that “grey wolves of Middle East origin were slightly closer to domestic dogs” as to the specific size-relevant allele.

Included in the wolves with haplotypes closest to small dogs are Spanish wolves. The authors conclude that their analysis was consistent with “a Middle Eastern origin for the small domestic dog haplotypes.” The authors elaborate:

“Many of the domestic dogs from Middle Eastern sites are small whereas those from Belgium, Germany and Western Russia are larger in size, which supports our hypothesis that small body size evolved early in the history of domestic dogs and probably in the Middle East…. Therefore, in concordance with past archeological studies, our molecular analysis provides strong evidence for the early evolution of small size in dogs in the Middle East, more than 12,000 years ago.”

The researchers observe that Akitas “were positioned between grey wolves and the main cluster of domestic dogs,” a finding providing some fuel for an alternative interpretation of the data discussed in the next section of this blog.

The researchers distinguish their results from those obtained by Savolainen et al. in 2002, which argued for an East Asian locus of canine domestication. The researchers note that Savolainen’s team looked at mitochondrial DNA, whereas the current study looked at nuclear DNA. They acknowledge that there could be a number of explanations for the difference in the results from the two approaches, but they argue that their findings are more consistent with the archeological record. “Small size could have been more desirable in more densely packed agrarian societies where dogs may have lived partly indoors or in confined outdoor spaces.”

A Contrary View. Two researchers in Savolainen’s camp responded quickly. In a comment published in the same journal as the original paper, these critics, Klutsch and Crapon de Caprona, note that only two wolves from China were sampled in the study by Gray et al. “Obviously, this is not enough to evaluate if Chinese wolves have a higher or lower genetic diversity from Middle Eastern wolves and they could by pure change be unrepresentative.”

The critics find the evidence from the Gray paper concerning Akitas important, and note:

“The clearest extractable result is that Akitas (as an ancient East Asian dog breed) are most closely related to wolves. The Akita included in this study exists in two sizes. The American Akita is derived from the ancient Japanese Akita, but has acquired a larger size, and is thus now considered to be another breed by the Japanese Kennel Club within the Fédération Cynologique Internationale. Since both breeds exist in North America, it would have been important to study the Akita samples according to the size of the dogs sampled… [I]t would have been important to know if it is the smaller Japanese breed (clearly bred for hundreds of years outside the Middle East) that is closest to the Middle Eastern wolves but also to other Asian wolf samples. The most parsimonious conclusion here would have been that the Japanese Akita dog is related to Asian wolves and Middle Eastern wolves represent a fraction of Asian wolves.”

The critics also argue that DNA studies must take into account the effects of hybridization between dogs and wolves, which has been argued by Pang et al. as occurring in the Middle East. The critics conclude that the data presented “do not lend strong support to the conclusion of Gray et al. that the SDH [small dog haplotype] is derived from Middle Eastern wolves in ancient times.”

It does not appear that the criticism of the research on small dog genetics disputes that this uniform characteristic of small dogs (found oddly in a few big dogs) began early in the period of domestication. The issue in dispute is where the small dog phenomenon began.

Response to the Response. Gray and Wayne responded to the criticisms of Klutsch and Crapon de Caprona. They argue that “if South-East Asia or any other region were the origin for the small haplotype we would expect at least one of these haplotypes to cluster with the small dog haplotype, and we find none.” The authors cite the paper by vonHoldt et al., also finding a Middle Eastern origin for domestication. Eight authors of the original 2007 or the 2010 small gene paper were also co-authors on the multi-authored (37) paper published by Nature online in March 2010.

Dogs as Creators of Wealth. Two scientists, one from Oxford and one from the Laboratory of Genomic Diversity in Maryland, joined the fray by noting that “there are almost as many different imputed locations for the dog’s origins as there are studies…. Moreover, wolves are highly mobile, resulting in scant geographic patterning in their genetics and, worse, dogs can interbreed with regional native wolf populations.” Finding that the research of Gray et al. may have avoided some pitfalls in prior genetic research, however, they accept that the Small Dog Haplotype probably descends from Middle Eastern wolves, provided “Middle Eastern wolves today most closely resemble Middle Eastern wolves of yesteryear.”

These two scientists, Driscoll and Macdonald, describe the Natufians, whose burials are the earliest firm evidence of canine domestication, as hunter-gathers who lived in permanent or semi-permanent settlements, and argue that this culture reflects a “narrow transition between Paleolithic nomadic hunter-gathering and the comparatively advanced settled agro-economics of the Neolothic.” This, they say, may be “the moment in which wolves crossed the canine Rubicon.”

Citing the work of the Coppingers, Driscoll and Macdonald say that the “initial association of wolves and humans was doubtless instigated by the wolves.” They speculate that “proto-domestic wolves were resident scavengers at the rubbish dumps of permanent settlements rather than nomadic camp followers,” and that this led to a separate lifestyle and reproductive isolation from larger wolves.

“To speculate yet more wildly, perhaps intraguild competition then led to small garbage-wolves that became vigilant barkers at the approach of larger and hostile wolves and, in so doing, further divided the population genetically. This series of developments would set up the assortative mating theoretically required for the sympatric divergence of the wolf population.”

The Natufians, argue Driscoll and Macdonald, “having originally selected runts on a whim, thereafter not only perpetuated their whimsy—selecting for cuddliness—but also began selecting for pint-sized functionality (such as ratting and entering burrows).” Since “diminution” would be maladaptive in the wild, it was probably selected for under the influence of people. The Natufians must have “had some loose cultural concept of tolerance for dogs, if not of caring and ownership of them.” Dogs may have even been the first “living capital,” a kind of wealth that could be accumulated, leading to economic hierarchies. 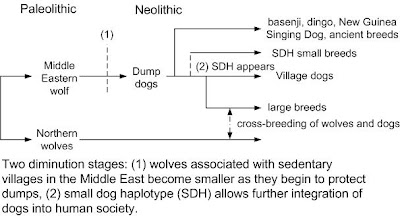 A flowchart in the paper presents an evolutionary timeline for two stages of shrinking: first when wolves at the dumps became smaller; second by artificial selection after some level of domestication, “resulting in the ancestor of the small breeds found today worldwide.” The flowchart presented here has been adapted for blog space and to emphasize the timeline of this interesting idea. Dogs, under the argument—and I think there is something to it—are a critical underpinning of certain basic premises to civilization—sedentary agriculture, wealth, private property, social hierarchies, even capitalism.

Waiting for Dogot. Klutsch and Savolainen have recently argued that future studies should look at Y-chromosome evidence, as well as ancient DNA samples of both wolves and dogs, as these “may give new insights into early domestication history and the dog’s migration routes.” Canids are an extremely mobile family. A recent paper finding, among other things, that Ethiopian wolves are closely related to coyotes, is curious in part because the ranges of the two groups (eastern Africa and the Americas) nowhere overlap.

The dispute between the Middle Easterners and the Far Easterners on the locus of domestication, and now on the locus of the origin of smallness in dogs, is the best theater in canine research I know. I left science long ago after the 19th expedition of the Te Vega and this sort of warfare is the part of scientific research I miss most. I wish both camps well, and hope they will continue to develop evidence and propose theories that will entertain us for years to come. The conflict itself advances our knowledge.