Egyptian Jackal Reclassified as the African Wolf by Genetics Researchers 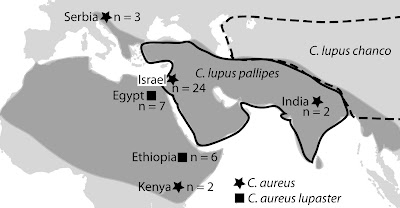 The golden jackal, Canis aureus, classified by Linnaeus in 1758, is found throughout north and east Africa, the Middle East, southeastern Europe, and parts of Asia. In 1833, Hemprich and Ehrenberg identified the Egyptian jackal, Canis aureus lupaster, as a subspecies of golden jackal, though Thomas Huxley noted as early as 1880 that the Egyptian jackal seemed suspiciously similar to the Indian wolf. A graduate student at Leeds, Magda Nassef, had investigated one gene segment in 2003 and concluded that the Egyptian jackal was more similar to a grey wolf than to any jackel. A larger study now confirms this.

The grey wolf's range extends to the Sinai Peninsula but not to mainland Africa, though there is an Ethiopian wolf (Canis simensis) whose range overlaps that of golden jackals found in the Ethiopian highlands. A team from the Universities of Oslo, Oxford, and Addis Ababa, determined that the Ethiopian highland jackals are in fact Egyptian jackals. More importantly, the team concluded that the Canis aureus lupaster, whether found in Egypt or Ethiopia, is a type of grey wolf. The paper's phylogenetic tree diagrams show the Ethiopian wolf as most closely related to the coyote (Canis latrans).

The researchers state that the Egyptian jackal “likely represents an ancient wolf lineage that colonized Africa prior to the radiation of the Holarctic wolf and as such should be reclassified as the African wolf.” This colonization probably happened during the Pleistocene (a broad time range from 2.6 million years ago to 12,100 years ago). They state that Canis aureus lupaster should no longer be considered a subspecies of jackal, and in fact represents the only grey wolf to inhabit the African continent.

The authors further shake up current phylogenetic classifications by concluding that the golden jackal is not in a monophyletic group with the two other named jackal species, the side-striped jackal (Canis adustus) and the black-backed jackal (Canis mesomelas), meaning that there is “reason to question whether the colloquial name jackal has any taxonomic integrity.”

The map reproduced here is taken from the paper posted by this research team, and shows the distribution of the golden jackal in dark grey. The range of the Indian wolf, Canis lupus pallipes, to which the now described African wolf is closely related, is shown in the center of the map, while the range of the Himalayan wolf, Canis lupus chanco, another relative, extends beyond the right edge. The black squares represent Canis lupaster animals that were sampled for DNA, while the stars represent Canis aureus animals sampled. The numbers show the number of animals sampled at each site.

In Ethiopia, jackals are, according to the authors, “systematically persecuted because of their threat to livestock.” The Egyptian jackal is also not protected.