The Killers of Actaeon 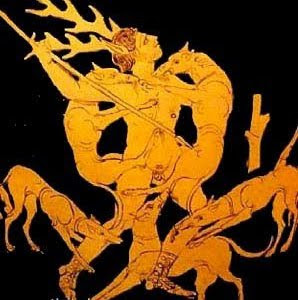 According to the most common version of the myth, Actaeon, son of Aristaeus and Autonoë, was hunting when he surprised Artemis bathing in a wood. Angered, she turned him into a stag and he was torn apart by his own hunting dogs. After their master's death, the dogs searched for him in vain, howling in their grief, until the centaur Chiron made a lifelike image of Actaeon to soothe them.

There are many variations of the story, but the most common depiction in art, particularly in vase painting, was of the dogs attacking Actaeon, the goddess watching and sometimes contributing to his death with her bow and arrow. The savage and sacrificial nature of the attack is emphasized in the first picture, a vase from Badisches Landensmueum (Karlsuhe, Germany, posted by Aaron J. Atsma on Theoi Greek Mythology, dated between 400 and 350 BC). The dogs are greyhound-like, but probably Laconians. A statue excavated at Herculaneum shows dogs attacking a stag, probably Actaeon fully transformed, with equal savagery.

P.M.C. Forbes Irving, in a study of metamorphosis in Greek myths, describes the essence of the story as "a hunting nightmare in which the hunter identifies with his victim." Nevertheless, he says that hunting, in such stories, has "a primarily imaginative and metaphorical significance," since hunting "had for a very long time played a fairly marginal role in Greek life." Actaeon's crime, if there was one, may have been rape, and there may be a revenge element in the actions of the goddess.

The deer, according to Forbes Irving, has metaphorical significance. "If the hunter was the supreme example of masculinity and daring, the deer is the traditional symbol of cowardice and weakness; it is with this psychological change that Ovid completes his description of the transformation: ‘and last of all she planted fear within his heart.’"

Walter Burkert, the great German scholar of Greek religion, describes the myth as having "a particularly ancient quality." The behavior of the dogs "goes beyond anything that could be observed in nature" since "real dogs cannot be comforted by an image." Burkert says the search of the dogs is a human ritual where the search for a torn-up victims ends in a symbolic restoration. Actaeon's "death is a sacrificial ritual of the hunt, consecrated by the Mistress of the Beasts and performed in the form that had been standard since Paleolithic times. The actors are dogs struck mad by 'wolf’s frenzy,' werewolves whose shrine is in a mountain cave." 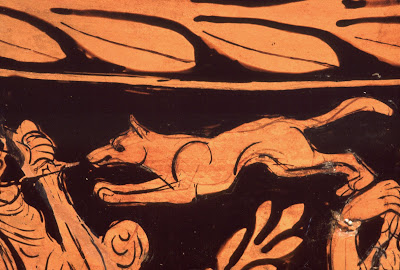 Vase paintings appear from the 6th century BC. In earlier pictures, Actaeon sometimes wears a deerskin, but by the middle of the 5th century he is often shown with antlers. The second vase, attributed to the Choephoroi Painter (Harvard 1960.37, dated 350-340BC), shows Actaeon just as the attackers are first making contact with their victim. The dogs are not easily identified with any ancient breed, but the one flying through the air towards Actaeon's sword (enlarged in the third plate) may be a Molossian, unafraid to attack even when about to be met with a deadly weapon. I had thought at first that the artist might be thinking more of a battle scene than a hunt since a sword seemed unlikely for a hunter. D.B. Hull, however, in his book on hounds and hunting, says that hunters sometimes carried the xiphos, which he describes as a "double-edged straight sword with a blade that usually swelled in width near the middle so that it was leaf-shaped," exactly what we see here. The sword was for protection in the event of an unexpected attack by a lion or wild boar.

Actaeon is usually shown dying without friends, but in the Louvre vase below (Louvre CA 3482, dated 460-440 BC), a comrade is also threatened by the mad dogs but may be escaping. The dog underneath Actaeon as he falls is likely a Laconian, while the one above him could be a Molossian. The Greeks often went on hunts with various types of dogs bred and trained for separate functions in the hunt, which may be something the painter, known as the Painter of Woolly Satires, was told about rather than having seen since the dogs are in positions they would hold while eating or standing, not running or attacking. The wolf-like color of the dog on top, which almost looks like a drawing of a lying dog that has been cut out and pasted in an inappropriate place, bothers me. Molossians were sometimes thought to have lion blood, not wolf blood, and are not shown with unusual coloration on any other vase I am aware of. Wolves were known to be able to cross with dogs (an evolutionary connection would not have been understood) and a cross might have been seen as a vicious animal (as is believed by many now--just consider the laws on wolf and coyote hybrids). Burkert's speculation about the dogs really being werewolves might find almost Jungian support here, but we must always beware making unconscious projections on the screen of antiquity, as E.R. Dodds long ago warned. A passage is Saara Lilja's study, Dogs in Greek Poetry, may help: 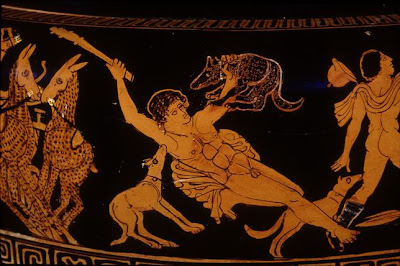 "Rabies may have been the real factor behind the well-known myth about Actaeon who, turned into a stag, was chased and mangled by his own hounds. But it should be remembered as well that the dog in old myths and in the Homeric epics may have sometimes been identified with the wolf. O. Keller's suggestion (Thiere des classischen Altertums 168) that λύσσα is etymologically akin to λύκος would suit a rabid dog's wolf-like behaviour."

There was a ritual reflecting the part of the myth concerning the dogs' visit to the cave of Chiron, who built the statue of their master to calm them. It took place on Mount Pelion in Thessaly, at the time of the rising of Sirius, the dog star, at the hottest point of summer. Young men of the upper classes of the area each sacrificed a sheep or a ram, then each put on the skin of the victim and climbed the mountain to the cave of Chiron. Burkert says this ritual corresponds to the journey of the dogs to the mysterious mountain cave. No dogs or dog skins appear to be involved in the ritual, however, and the association with Actaeon may be a later layer to the initially local tradition surrounding the ritual.

Thanks to Richard Hawkins of Fern Hill Scottish Deerhounds for suggesting this blog topic.
Posted by John Ensminger at 11:53 AM