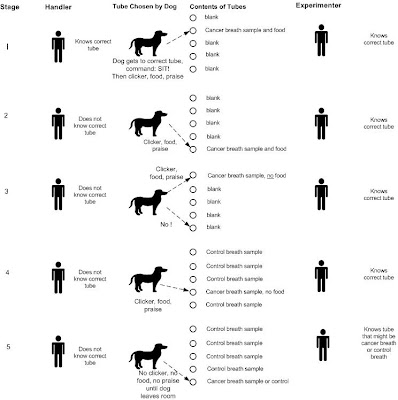 Training dogs to detect lung and breast cancers requires a rigorous training approach. A team that used 3 Labrador Retrievers and 2 Portuguese Water Dogs taught the dogs to distinguish a tube with a cancer breath sample and food from four blank tubes. In this, the first stage, the dogs were taught to SIT before the correct sample, then received food and praise. In the second stage, the dogs still distinguished a tube with a cancer breath sample and food from blank tubes, but the handler did not know which tube was correct. The dogs got food and praise on sitting before the correct tube. In the third stage they received the same rewards, but there was no food in the tube with the cancer breath sample. They were also reprimanded with a No! if they chose the wrong sample in this stage. In the fourth phase, each tube had a breath sample, but only one had a cancer breath sample. In the final phase, it was possible that all five tubes had cancer-free samples, so that alerting to any of them would be a fail. One tube might have a cancer breath sample, requiring an alert. Neither the handler or the experimenter knew if there was a cancer sample in this final stage, and dogs received no reward at this stage for a correct alert until they left the experimental room. (Click on the table to the right, showing the stages of training, for a larger image.) A dog was not fully trained until it made no mistake for 30 consecutive trials. The dogs could not detect patients in remission, but for one individual thought to be in remission, the dogs sat before her breath and the cancer was later found to be active again. Dogs detected lung cancer with 99% consistency with biopsy-confirmed diagnoses, and breast cancer with 88% consistency. Michael McCulloch, Tadeusz Jezierski, Michael Broffman, Alan Hubbard, Kirk Turner, and Teresa Janecki, “Diagnostic Accuracy of Canine Scent Detection in Early- and Late-Stage Lung and Breast Cancers,” 5(1) Integrative Cancer Therapies 30-39 (March 2006). There are a number of legal or at least ethical issues that will arise if this dog function becomes more prevalent. As Mary Elizabeth Thurston noted in her wonderful book, Lost History of the Canine Race (p. 58 in the Avon edition), sniffer dogs might be useful in poor countries. I have previously suggested that they might be taken to remote locations in parts of the U.S. Will this mean they are owned by facilities and are essentially laboratory dogs? What protections can they be given? Will facilities that use them have to cover them with malpractice insurance?
Posted by John Ensminger at 7:15 PM