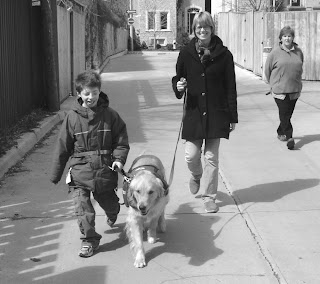 Service dogs for autistic children are proving beneficial for both the children and their families. National Service Dogs of Cambridge, Ontario, uses a double-leash system where the autistic child is attached to the dog by a leash that is attached to the child’s belt. A parent or other person holds a separate leash. The dog obeys the parent’s commands, but is also trained to prevent the child from bolting away from the parent, or into traffic. Golden and Labrador Retrievers are preferred by National Service Dogs for this work. Three researchers studying ten families where such dogs had been placed found that in addition to keeping the child safe, autistic children began to walk at the dog’s speed, making going places more pleasant for the whole family. Families reported that they generally let the dog sleep with the child, and both children and families often slept better. The autistic children were reported to learn new skills with the dog. “Parents reported a wide variety of physical tasks that were facilitated by the dog’s participation. One child learned how to take the lid off a dog food container, pour the food into the dog’s bowl, place the bowl on the floor, and look at the parent to give the dog a command to eat the food. A number of children learned how to pick up and throw a ball for their dog. Motor function improvements were gained by the parents sitting with the child and helping him/her learn how to pet the dog. Many of the children struggled to control their movements to pet the dog, and by using the dog as a therapeutic tool the parents were able to teach the children to pet or caress the dogs gently. Children learned to throw a ball and manipulated grooming tools.” The Canadian researchers reported that families began to consider taking vacations after getting a service dog because traveling with the autistic child became easier. People encountering families with service dogs were also friendlier, and the families were less inclined to avoid interactions for fear that the autistic child would have a tantrum. As with many service dogs, there is more demand than there is supply, and it is to be hoped that more service dogs can be trained to live with families with autistic children. Kristen E. Burrows, Cindy L. Adams, and Jude Spiers, “Sentinels of Safety: Service Dogs Ensure Safety and Enhance Freedom and Well-Being for Families with Autistic Children,” 18(12) Qualitative Health Research 1642-1649 (2008).
Posted by John Ensminger at 7:23 PM