Dogs Take Our Visual Perspective Into Account When Obeying Our Commands 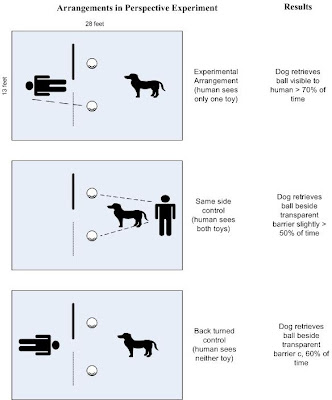 Dogs have been shown in numerous experiments to be very good at following a human’s pointing gestures to find hidden food. They have even been shown to follow the movements of our eyes. This is generally thought to prove that in the process of domestication they have learned to interpret certain signals given by humans. Most other species, including apes and wolves, do not follow our gestures as well, though there are some studies of wolves that indicate they may be able to understand pointing gestures just as well, or even better in certain settings, than dogs. A recent study by scientists at Cambridge University and the Max Planck Institute in Leipzig asked a different question. Do dogs consider a human’s visual perspective in attempting to carry out that human’s command? Put another way, do dogs interpret the command by taking into account what they know the human can see and what they know he cannot see?

The experiment was designed as follows. A human stood at one end of a room and a dog at the other end. There were two barriers closer to the human. On the side of the barriers where the dog stood were two toys. One of the barriers was opaque and prevented the human from seeing the toy on the dog’s side of the barrier. The other barrier was transparent and though it was between the human and the toy, the human could see through it. The human, without looking at either toy and without signaling in any way, commands the dog to FETCH. The dog will be rewarded if he brings either toy to the human. That is the first situation depicted in the figure (click on the figure to see an enlargement).

In the second situation, the human stands behind the dog and both of them are able to see both of the toys. Each toy is beside a barrier as before, and one of the barriers is opaque and one transparent, but neither block the human’s view of the toy since the human has the same perspective as the dog. Here again, the command is to FETCH.

In the third situation, the human is back on the side of the barrier where he could only see the toy beside the transparent barrier, but his back is turned so that he sees neither toy, nor the barriers, nor the dog. Again he tells the dog to FETCH.

In each situation the dog could bring either toy to the human, yet the choices the dogs made in the first situation were not random. In 70% or more of the cases the dogs brought the toy that the human could see to him on the command to FETCH. In the third situation, where the human was looking away from everything in the room, the dogs brought the toy beside the transparent barrier about 60% of the time, as if expecting that the human’s command would apply to the toy he could see if he did turn around. Only in the second situation, where the dog was aware that he and the human could see both toys did the dogs choose almost randomly, with slightly more than half of the dogs in the experiment choosing the toy beside the transparent barrier. Different dogs were used for each of the three situations.

The researchers concluded that dogs take into account the perspectives of humans in deciding how to interpret their commands. They do not just choose from what they themselves can see. They take into account what we can see. When I began taking lessons with Chloe, Rick Manley of the Phoenix Field and Obedience Club told me not to let my frustration get to me. "She does want you to be happy. You have to learn to understand each other." Perhaps this research provides a scientific basis for his statement. Juliane Kaminski, Juliane Brauer, Josep Call, and Michael Tomasello, “Domestic Dogs Are Sensitive to a Human’s Perspective,” 146 Behaviour 978-998 (2009)
Posted by John Ensminger at 8:39 PM