Empathy Responses of Dogs to Other Dogs? 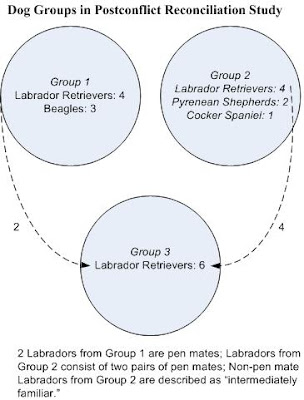 Wolves and feral dogs live and hunt or scavenge in groups. Conflicts can arise between members of a group over food, efforts to mate, and for other reasons. Resolving these conflicts becomes important, since continuing hostility can reduce the effectiveness of the group to act as a unit. Curiously, conflict resolution has not often been studied in dogs, so recently published research by three Belgian scientists at the University of Antwerp is particularly interesting. The researchers used dogs that were housed at a pet food production company, but the dogs were not used to test food during the period of the research. The dogs were housed in pens that held two or three dogs and all were between three and ten years old. During the day the dogs in the group that was being studied were released for many hours to a meadow surrounded by a fence where their interactions were recorded by observers. The first and second groups studied consisted of seven dogs, four males and three females. The third group was formed from two Labrador Retrievers from the first group and four from the second, four of them male and two female. The groups are depicted in the figure.

When a group was released to the meadow, observers recorded conflict interactions of the dogs, dividing their behavior into light aggression (growling, directed barking, bending over, inhibited biting, head-prodding), grave aggression (biting, fighting, knocking down), submission (active submission, passive submission, averting eyes), affiliation (greeting, sitting/lying down together, anogenital sniffing, playing, licking), and neutral behaviors (sitting/lying down alone, drinking, throwing ground, following). If grave aggression did not end within several seconds, an observer intervened to prevent serious injury. Most conflicts were brief, lasting only a few seconds, in which one of the opponents often made a submissive gesture. The most common form of physical conflict arose when a male paid more attention to a female than she cared for.

The observers recorded 1711 conflicts, with former opponents making up by some affiliation behavior in 606 cases (a little over a third), and third parties providing some affiliation in 621 cases (also over a third). The remaining cases ended without reported affiliation behavior. In these cases, the opponents usually avoided each other for several minutes or more. Where third parties—dogs not involved in the conflict—engaged in affiliation behavior, loser directed affiliation was the most common behavior, and in these situations the intervention was more often initiated by the third party rather than by the loser. This meant that true consolation seemed to be involved, as opposed to solicited consolation by the loser whimpering or seeking attention. Affiliative behavior was generally observed more between dogs that shared pens, supporting the “valuable relationship hypothesis,” which predicts that reconciliation will be more frequent between opponents whose relationship is of high biological value. This arguably is present between dogs that share the same pen and must learn to get along.

The authors admit that their study does not prove cognitive empathy in dogs, but they believe that “dogs do possess significant social cognition.” Given that wolf packs are often larger than packs of feral dogs, it would be important (though very difficult) to determine the extent of conflict resolution in the group behavior of wolves. Annemieke K.A. Cools, Alain J.-M. Van Hout, and Mark H.J. Nelissen, “Canine Reconciliation and Third-Party Initiated Postconflict Affiliation: Do Peacemaking Social Mechanisms in Dogs Rival Those of Higher Primates?” 114 Ethology 53-63 (2008).

Additional Note. Ronald Keats, a Shiba Inu owner, has been following the plight of dogs in Japan following the 2011 earthquake and sent me a YouTube link, showing a dog that would not leave his friend's side. Hopefully some of the people filming this took some action.
Posted by John Ensminger at 5:59 PM